The Palestinian village of Deir Abu Mash'al lies some 25 kilometers northwest of Ramallah. It has a population of about 5,000, many of whom work in Ramallah. About 150 of the residents work in Israel and have to cross the Ni'lin checkpoint on their commute every day. On the evening of Friday, 16 June 2017, three residents of the village carried out an attack near Damascus Gate in East Jerusalem, killing Border Police Officer Hadas Malka, 23, and wounding four other people. The three assailants, Baraa Saleh, 18, ‘Adel ‘Ankush, 18, and Ousama ‘Ata, 19, were shot to death by Israeli security forces over the course of the attack. Ever since then, Israel has been disrupting the lives of all residents of the village, although they were not involved in the attack and have not been accused of any wrongdoing.

Following the attack, Border Police officers and soldiers entered the village and imposed several restrictive measures. On the night of the attack itself, Israeli security forces installed an iron gate at the main entrance to the village and refused to let anyone cross it in either direction, neither on foot nor by car. The military also blocked off the three dirt roads leading to the village with stones and piles of earth. The next day, village residents removed some of the blockage from two roads, enough to enable only a four-wheel drive to get through. This recurred over the following days, with the military blocking the roads and residents removing the obstacles. Soldiers stand beside the gate installed by the military at the main entrance to the village. Photo by 'Amer 'Aruri, B'Tselem, 19 June '17

On Monday, 19 June 2017, security forces allowed most of the village residents to leave the village on foot via the main entrance, barring men between the ages of 15 and 25. The next day, the forces opened the gate part of the way, allowing cars through but only after lengthy checks, including searches of the cars. The ban on exit by men aged 15 to 25 remained in place.

It wasn’t until the evening of Saturday, 24 June 2017, when the high holiday of ‘Eid al-Fitr began, that security forces made travel by car easier. Nonetheless, the iron gate remains in place and forces are stationed beside it some of the time, performing random checks.

In addition to the restrictions on movement, which have affected the entire population of the village, security forces confiscated some 50 vehicles from residents for ostensibly lacking licenses. In addition, 50 village residents who work in Israel – all from the assailants’ extended families – had their work permits revoked. The permits were revoked when they reached the checkpoint on their way to work, without prior notice and with no opportunity to challenge the decision.

On Sunday, 18 June, soldiers raided five homes in the village, three of them belonging to the families of the assailants. . The soldiers informed the parents of the assailants that their houses would be demolished as punishment for the actions of their sons. If this occurs, 15 people, including 5 innocent minors, will be left without a roof over their heads.

In one home, the soldiers damaged property and left a mess behind them. ‘Adel ‘Ankush’s mother, 46, was arrested on 21 June and is still in custody. On 29 June, forces again entered the village, arresting ‘Ancush’s father and searching Ousamah Ata’s home once again.

When the forces first entered the village, violent altercations erupted between them and local residents, during which two young men from the village were hurt. They were taken to hospital in Ramallah in an ambulance that had to use a bypass dirt road. Three days later, on 19 June, security forces returned to the village at 5:00 A.M. and went into a home to carry out arrests. This also resulted in altercations in which two more local residents were hurt. The clashes ended when the forces left the village at around 8:00 A.M.

For almost two weeks now, ever since the attack, the military has been disrupting the lives of all 5,000 or so residents of the village, although they have been accused of no personal wrongdoing. This automatic form of retaliation has become a matter of policy for the military, in a cynical abuse of its power to mistreat civilians. This kind of collective harm is morally and legally indefensible. One of the dirt roads blocked by the military. Photo by 'Amer 'Aruri, B'Tselem, 19 June '17

On 21 June 2017, B’Tselem field researcher 'Amer 'Aruri spoke with two village residents who feared to disclose their names, and with another who agreed to be identified.

A village resident who preferred to remain anonymous related:

I’m a merchant, and I have a permit to enter Israel. On Saturday I wasn’t able to leave, but on Sunday, 18 June, I had to get to the bank in Ramallah. I have a regular car that can’t drive on the unpaved farm roads, so I borrowed my brother’s four-wheel drive. It took me about half an hour on the farm road just to get to Deir Nidham, and there I took the main road to Ramallah. The trip took almost an hour. Usually, it takes half an hour at most to get to Ramallah.

On Tuesday, 20 June 2017, I heard that the soldiers had opened the gate and lifted the closure. At around eleven o’clock in the morning, I set out in my car towards the main exit. When I got there, I saw that the soldiers were still there. They opened the iron gate part of the way. Cars were going both ways and the soldiers were checking every single car going in or out, as well as the IDs of the passengers. There was a huge traffic jam at the entrance.

When it was my turn, the soldier went through my car from top to bottom. He even popped the hood and opened the trunk. He checked my ID and asked me sarcastically if I had an M16 . I said no and drove off.

I am from the ‘Ata family. I work in construction inside Israel. On Sunday, 18 June 2017, at around four o’clock in the morning, I got to Ni’lin checkpoint after going the long way on a farm road to get out of the village. There were five more laborers with me in the car, four of them from our family. At the checkpoint, they only let the laborer who wasn’t from our family through. They turned the rest of us back. I asked the guard why I wasn’t allowed across, and he said our family was “causing trouble”.

I couldn’t do anything that day, so I went back home. Other laborers from the ‘Ata, ‘Ankush and Saleh families told me that the exact same thing happened to them.

I have five children and no other source of income. The day I went back home, my employer called me and said that if I didn’t come in to work, he’d fire me. I don’t know what I’ll do if they don’t give me my permit back. ‘Eid al-Fitr is coming up and I don’t think I’ll be able to buy the kids clothes, as is the custom on high holidays. I’m worried that if I don’t go back to work, I’ll need the money to put food on the table.

Muhammad Faiz Muhammad ‘Ata, a married father of five, said in his testimony: I live in the al-Mu’alaka neighborhood in the village, in  a two-story building. The second story is still under construction. We have a livestock pen next to the house.

Today, 21 June 2017, at six in the morning, I heard loud banging on the door. I opened it and found myself facing soldiers and an officer. The officer ordered me to lie down on the floor, but I refused. One of the soldiers grabbed me and sat me down on the floor. The other soldiers came in and started searching our home. I got up immediately and followed them. I told them my wife and children were asleep, but it was no use.

The soldiers went into the kitchen and threw the dishes on the floor. The sound of the breaking dishes woke my wife and children. When they saw the soldiers in the house, some of them started crying. Several soldiers went into our bedroom and started throwing our clothes on the floor. They also turned over the couches and the tables in the living room. I asked the officer if they had a search warrant. He said: “They kill Jews and want a search warrant”?

This went on for about an hour. They left a terrible mess all over the house. In the kitchen, they broke dishes and spilled rice. They broke a livestock milking pump that we were keeping on the second story. They turned the living room upside down and left clothes all over the floor in our bedroom. I don’t know what they were looking for and why they came into our house. They refused to tell me.

Photos: Damaged property and mess left by soldiers in the 'Ata home. Photos courtesy of the family, 21 June '17 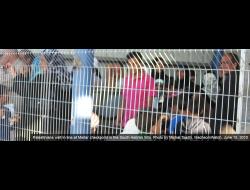 Just because of their name: Israel punishing hundreds of Palestinians by preventing them from working in Israel