Preparations for committing a war crime: Israeli police and Civil Administration arrived this morning at the Palestinian community of Khan al-Ahmar which Israel plans to forcibely transfer

This morning (Sunday, 1 July 2018), Israeli police and Civil Administration personnel arrived at Khan al-Ahmar, the Palestinian community Israel announced it plans to transfer. The troops walked through Khan al-Ahmar, among the residents' homes, in what appeared to be preparations for the planned demolition of the community. Residents reported that a police officer told them they would be forcibly removed and that they would be better off if they left "voluntarily." The police officer declined to name the date of the transfer.

On Thursday, 24 May 2018, three Israeli Supreme Court justices – Noam Sohlberg, Anat Baron and Yael Willner – ruled that the state may demolish the homes of the community of Khan al-Ahmar and transfer the residents from their homes. This ruling removes the last impediment which had thus far served to defer the transfer of the community, a war crime under international law. 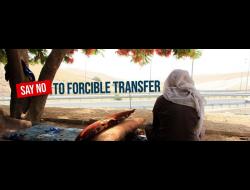 The Israeli Supreme Court in the Service of the Occupation
