The dispossession and violence that mark Israel’s policy in the West Bank peak during the olive harvest, when Palestinians need to access their land to pick the olives off their trees. Olives are a major sector of the West Bank economy and the season used to be a festive time, in which Palestinian families celebrated their agricultural produce and their connection to the land. For years, however, the olive harvest has been carried out in the shadow of Israel’s land grab, which includes violent acts by soldiers and settlers, damage to trees and theft of crops.

This year, too, B’Tselem documented dozens of instances in which settlers assaulted Palestinian farmers, stole olives and vandalized trees, farming equipment and work tools. All this occurred under the noses of soldiers, who are almost always present in the area, in military posts or at nearby lookouts.

These acts take place all year round throughout the West Bank. The difference is that Israel makes a show of providing Palestinian farmers with special protection during the harvest season. To that purported end, the Israeli District Coordination Office (DCO) schedules specially coordinated days for farmers whose land lies near settlements, so that the military will supposedly provide them protection against settlers. Yet this façade does little to actually help the farmers.

First, the mechanism of ‘coordination’ relies on the assumption that settler violence is a given, rather than a reality that can – and should – be altered. Instead of investing in prevention and accountability, the state imposes draconian restrictions on the Palestinian farmers, who have the right to access their land. Second, it allocates the farmers so few days that they cannot complete the harvest, and sets unsuitable dates. For example, this year the DCO scheduled the coordinated days to begin on 27 October, almost two weeks after the harvest officially began. Farmers in Ramallah District informed B’Tselem that DCO representatives had told them the reason was to avoid clashes with Jewish high holidays. The delay cost the farmers precious harvest days, which the military allowed settlers to use to steal some of the crops. Finally, the cumbersome bureaucracy imposed by Israel makes it difficult – at times impossible – for the farmers to reach their land.

Even when farmers do manage to get to their plots on the allotted days, the military offers them scant protection. In some cases, the soldiers never show up at the scheduled time, leaving the farmers vulnerable to the whims of settlers. At other times, soldiers do arrive but as soon as settlers emerge, quickly banish the Palestinians and even resort to violence and weapons to do so, while taking little to no action against the settlers. Israel’s law enforcement authorities in the West Bank fully back this violence and do not even bother investigating assaults or arresting the perpetrators.

The overall conduct of the Israeli authorities during the olive harvest season is indicative of the unlawful policy that Israel has implemented in the West Bank for decades. This policy centers on dispossessing Palestinians, including farmers, and preventing any possibility of development – willfully ignoring the needs, rights and wishes of the Palestinian population while continuously expanding settlements, developing them and promoting other Israeli interests.

Settler violence Backed by the State
Restrictions on Movement 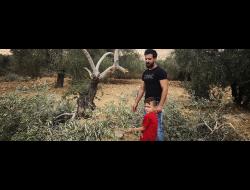