This morning, B’Tselem published a position paper refuting the conclusion of Attorney General Dr. Avichai Mandelblit – the highest legal authority in Israel’s executive branch, whose legal opinion represents the government – that the Prosecutor of the International Criminal Court (ICC) has no jurisdiction to investigate suspected war crimes by Israel. B’Tselem’s analysis of the AG’s main arguments and the sources for them found the AG had relied on partial quotes taken out of context, flouted the provisions of international law regarding occupation, overlooked the international community’s positions on Israel’s policy in the Occupied Territories for more than fifty years, and absurdly misrepresented reality.

In his memorandum, AG Mandelblit insists that only sovereign states can be members of the Rome Statute and delegate their jurisdiction to the ICC (and that Palestine is not such a state). Yet instead of proving this claim, he centers on the uncontested point that Palestine is not a sovereign state. To provide substantiation for this point, the AG makes several assertions that are entirely divorced from reality:

The AG claims there is no occupation – conveniently ignoring the facts on the ground, the principles of international law and the declared positions of the international community. He glosses over more than 52 years in which Israel has kept the West Bank and Gaza Strip under a cruel, violent occupation regime, transforming the area completely. Palestinian space is now fragmented into isolated units in which Palestinians live without political rights or any real control over their lives – which are run by various Israeli authorities.

The AG also describes Israel and the Palestinians as negotiating in good faith to bring about full reconciliation. In these circumstances, he argues, the parties do not need “a criminal process to pull them further apart”. Yet the attempt to hide behind supposed negotiations is utterly disconnected from Israel’s actions and declared long-term intentions regarding the Occupied Territories. Israel’s top officials have long since confirmed that the state does not view the occupation as temporary and intends to cement its control over the Palestinians while dispossessing them of land and rights.

Ultimately, Israel – by means of its attorney general – is seeking to continue its policies undisturbed. That is why state representatives are trying to present Israel’s actions in the Occupied Territories as impeccable, in the hope of fending off a possible ICC investigation. When the Palestinian Authority announced Palestine was joining the ICC in January 2015, Prime Minister Netanyahu wrote in a letter to several heads of state: “Seven decades after the Holocaust, the Palestinians are brazenly pointing a finger at Israel, the most threatened democracy in the world.” Recently, in response to the ICC Prosecutor’s announcement there was reasonable cause to launch an investigation into the situation in Palestine, Netanyahu went further back than the Holocaust, all the way to Hellenic times, saying: “2,000 years ago we fought against anti-Semitic decrees by Antiochus, who wished to deny our rights… on Friday we have learned of new decrees against the Jewish people – anti-Semitic decrees by the International Criminal Court.” Netanyahu later called for sanctions “against the ICC, its officials, prosecutors, everyone”, and the media recently reported that Israel is working with the Trump administration to coordinate measures against the ICC.

For many years, Israel has enjoyed total immunity regarding its actions in the Occupied Territories. Domestically, not a single person has paid a significant price for these actions thanks to the almost blanket criminal and civil immunity Israel accords itself. Internationally, very little (if anything) has been done to compel Israel to change its policies. Instead, it enjoys generous financial benefits and international legitimacy. Israel is now railing against the prospect of actually being held accountable for some of its crimes.

It is important to understand the real bone of contention here. It is not jurisdiction, but the very values that the ICC is meant to safeguard – the values that the world has been trying to promote since the end of World War II, in response to the unspeakable atrocities committed during that dark chapter in history. With shameless cynicism, Israel is trying to use these very horrors to justify continued oppression, land grab and killings at its own hands, dismissing global efforts over the last 75 years to develop and enforce laws that would limit power and help form a world based on justice, equality and dignity for all. These are the values that Israel is now scornfully rejecting. These are the values that we must now, more than ever, insist on upholding.

Israel’s attempt to clutch at formalistic straws to evade the ICC’s jurisdiction is shameful. Since Palestine joined the Rome Statute, it has the right to demand an investigation into the situation there. Palestine is not a ‘sovereign state’ precisely because it is under Israeli occupation, whose crimes the ICC has the jurisdiction – and responsibility – to investigate. We hope the Court will make the right decision, sustain the Prosecutor’s position, and decide: indeed it has jurisdiction – and there will be an investigation.

On 20 December 2019, the Prosecutor of the ICC announced that after five years of preliminary examination, she found the conditions for initiating an investigation into the situation in Palestine had been satisfied and that there were reasonable grounds to believe that war crimes have been, or are being, committed in the West Bank (including East Jerusalem) and the Gaza Strip by Israel, Hamas and other Palestinian armed groups. The suspicions against Israel include its conduct in Operation Protective Edge and the Great March of Return protests, as well as its settlement policy. The Prosecutor sought a ruling from the ICC to confirm her position regarding the court’s jurisdiction with respect to the situation in Palestine before initiating the investigation. The Israeli AG published a memorandum several hours before the Prosecutor’s announcement, which B’Tselem now analyzed.

States, organizations and individuals who were granted their requests to submit a position to the ICC regarding its jurisdiction in Palestine must do so by 16 March 2020. Until that time, Palestine, Israel and victims may also submit their positions, on this question only. The Prosecutor must submit her position by 30 March 2020. 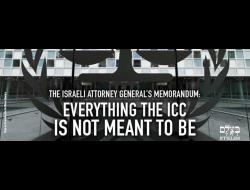 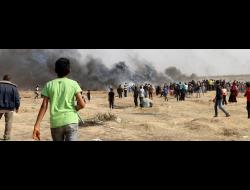 The year in review: Israeli forces killed 133 Palestinians, 28 of them minors
