The Jordan Valley is classified as Area C and is, therefore, under complete Israeli control. Israel has imposed harsh restrictions on building and movement there that apply to Palestinians alone, effectively pushing them to leave area.

The Bedouin community of al-Hadidiyeh is situated in the north of the Jordan Valley. The settlements Ro'i and Beka'ot were built east of it, partially on its farmland. ‘Abd a-Rahim Bsharat, 60, who has lived in the community his whole life, estimates that there are ten families, a total of 91 persons, now living in it, in three small clusters. The residents, like those of many other small Bedouin communities in the Jordan Valley, gain their livelihood by raising sheep and goats and by working their land.

In the census taken by Israel in 1967, the authorities registered all persons living in the area as residents of the nearby towns of Tammun and Tubas. Therefore, there is no official information on the number of residents who lived in al-Hadidiyeh at the time. Bsharat estimates that before 1967, there were about 2,500 residents, some of whom fled to Jordan after the war.

Since the mid-1970s, Israel has pressured the residents to abandon their land, along with establishing settlements in the area. Bsharat describes how the army fined shepherds who grazed their flocks on land near the settlements, and how, in some instances, soldiers fired at the flocks, killing several sheep and confiscating animals. In recent months, B'Tselem has documented several cases in which residents of al-Hadidiyeh claimed that the security coordinators of Ro'i and Beka'ot assaulted or harassed them while they were grazing their flocks, in an attempt to distance them from the settlements. The testimonies paint a worrisome picture of army and police support for the security coordinators' harassment of the shepherds.

Three years ago, the Israeli High Court of Justice ordered that the residents of al-Hadidiyeh be removed from their homes, accepting the position of the Civil Administration that the residents were living on land classified as “agricultural” in plans drafted by the British Mandate in the 1940s. The High Court also accepted the state's position that their living on the site posed a security threat because of its proximity to the Ro'i settlement.
In recent years, the Civil Administration demolished the shacks of the Bsharat family and others in the community four times. Currently, the Civil Administration threatens to demolish all the shacks in the community yet again. Map: the small community of al-Hadidiyeh and the settlements built near it.

The harsh restrictions Israel places on movement of Palestinians in the Jordan Valley make life very difficult for the residents of al-Hadidiyeh. In addition to the general restrictions, the army has blocked access from the community to the Alon Road (Route 578), by placing a dirt pile on a connecting dirt road that crosses fields cultivated by Ro'i settlers. To reach the Alon Road, residents of al-Hadidiyeh must cross through part of the Ro'i settlement itself, and when the gate to the settlement is closed, they have to travel a much longer route, which runs between Ro'i and Beka'ot.

Residents of al-Hadidiyeh receive all their services from the towns of Tammun and Tubas, which are situated in Area A. The shortest way to the two towns is along a dirt road leading to Tammun, a trip that takes 15 minutes. The army placed a gate on the road that it opens only twice a week, at set times in the morning and afternoon. Only persons registered with the army as residents of the area, including residents of al-Hadidiyeh, are allowed to pass. At other times, the residents must drive to the Hamra checkpoint, about 30 minutes' travel south of al-Hadidiyeh, and from there north to Tammun or Tubas, a trip that takes another 30 minutes.

Persons requiring medical treatment also have to use this route. The army does not allow Palestinian ambulances to cross the Hamra checkpoint to go to Palestinian communities in the Jordan Valley, even in emergency cases. The ambulances have to wait at the checkpoint for the patient to be brought to them.

The community has no school, and to get to their schools in Tammun, the children from al-Hadidiyeh have to travel the long way via the Hamra checkpoint. To enable them to attend school regularly, many of the children spend weekday nights with relatives in Tammun.
The residents of al-Hadidiyeh also have trouble marketing their produce throughout the West Bank since it is hard for West Bank merchants to reach al-Hadidiyeh and nearby communities.

Al-Hadidiyeh is not hooked up to the power grid and does not have running water. The nearby settlements, on the other hand, are hooked up to the Israeli power grid and are supplied water by the Beka'ot 1 Pumping Station, which was built by the Israel's water company, Mekorot. Although the pumping station is adjacent to their land, residents of al-Hadidiyeh have no choice but to buy water from private contractors, who come to the area every few days and charge up to 200 shekels for 10 cubic meters of water, four times the price Mekorot charges in Israel and in the settlements. 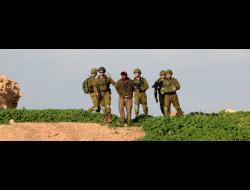