Israel’s planning and building policy in the West Bank is aimed at preventing Palestinian development and dispossessing Palestinians of their land. This is masked by use of the same professional and legal terms applied to development in settlements and in Israel proper, such as “planning and building laws”, “urban building plans (UBPs)”, “planning proceedings” and “illegal construction”. However, while the planning and building laws benefit Jewish communities by regulating development and balancing different needs, they serve the exact opposite purpose when applied to Palestinian communities in the West Bank. There, Israel exploits the law to prevent development, thwart planning and carry out demolitions. This is part of a broader political agenda to maximize the use of West Bank resources for Israeli needs, while minimizing the land reserves available to Palestinians.

Geared towards enabling Israel to use as much West Bank land as possible, Israel’s planning policy prevents Palestinian development and dispossesses Palestinians of their land.

The 1995 Oslo II Accord divided the West Bank into three types of areas. Concentrations of Palestinian population in built-up areas, which were – and still are – home to most of the Palestinian population in the West Bank, were designated Areas A and B and officially handed over to Palestinian Authority control. They are dotted throughout the West Bank in 165 disconnected ‘islands’. The remaining 61% of the West Bank were designated Area C – the land mass surrounding Areas A and B, where Israel retains full control over security and civil affairs, including planning, building, laying infrastructure and development. This artificial division, which was meant to remain in effect for five years only, does not reflect geographic reality or Palestinian space.

In the West Bank, the potential for urban, agricultural and economic development remains in Area C. Israel uses its control over the area to quash Palestinian planning and building. In about 60% of Area C – 36% of the West Bank – Israel has blocked Palestinian development by designating large swathes of land as state land, survey land, firing zones, nature reserves and national parks; by allocating land to settlements and their regional councils; or by introducing prohibitions to the area now trapped between the Separation Barrier and the Green Line (the boundary between Israel's sovereign territory and the West Bank).

Even in the remaining 40% of Area C, Israel restricts Palestinian construction by seldom approving requests for building permits, whether for housing, for agricultural or public uses, or for laying infrastructure. The Civil Administration (CA) – the branch of the Israeli military designated to handle civil matters in Area C – refuses to prepare outline plans for the vast majority of Palestinian communities there. As of November 2017, the Civil Administration had drafted and approved plans for only 16 of the 180 communities which lie in their entirety in Area C. The plans cover a total of 17,673 dunams (1 dunam = 1,000 square meters), less than 1% of Area C, most of which are already built-up. The plans were drawn up without consulting the communities and do not meet international planning standards. Their boundaries run close to the built-up areas of the villages, leaving out land for farming, grazing flocks and future development. Since 2011, seeing that the Civil Administration did not draft plans as it is obliged to do, dozens of Palestinian communities – with the help of Palestinian and international organizations and in coordination with the PA – drafted their own plans. Some of the plans covered communities or villages located in full in Area C and others covered places only partly in Area C. As of September 2018, 102 plans had been submitted to the Civil Administration’s planning bodies, but by the end of 2018, a mere five plans – covering an area of about 1,00 dunams (or about 0.03% of Area C) – had received approval.

The odds of a Palestinian receiving a building permit in Area C – even on privately owned land – are slim to none. Given the futility of the effort, many Palestinians forgo requesting a permit altogether. Without any possibility of receiving a permit and building legally, the needs of a growing population leave Palestinians no choice but to develop their communities and build homes without permits. This, in turn, forces them to live under the constant threat of seeing their homes and businesses demolished.

The impact of this Israeli policy extends beyond Area C, to the hundreds of Palestinians communities located entirely or partially in Areas A and B, as the land reserves for many of these communities lie in Area C and are subject to Israeli restrictions there.

The demand for land for development has grown considerably since the 1995 division of the West Bank: The Palestinian population has nearly doubled, and the land reserves in Areas A and B have been nearly exhausted. Due to the housing shortage, much land still available in these areas is used for residential construction, even if it is more suited for other uses, such as agriculture.

Without land for construction, local Palestinian authorities cannot supply public services that require new structures, such as medical clinics and schools, nor can they plan open spaces for recreation within communities. Realizing the economic potential of Area C – in branches such as agriculture, quarrying for minerals and stone for construction, industry, tourism and community development – is essential to the development of the entire West Bank, including creating jobs and reducing poverty. Area C is also vital for regional planning, including laying infrastructure and connecting Palestinian communities throughout the West Bank.

In contrast to the restrictive planning for Palestinian communities, Israeli settlements – all of which are located in Area C – are allocated vast tracts of land, drawn up detailed plans, connected to advanced infrastructure, and the authorities turn a blind eye to illegal construction in them. Detailed, modern plans have been drawn up for the settlements, including public areas, green zones and, often, spacious residential areas. They enjoy a massive amount of land, including farmland that can serve for future development.

Israel’s policy in Area C is based on the assumption that the area is primarily meant to serve Israeli needs, and on the ambition to annex large parts of it to the sovereign territory of Israel. To that end, Israel works to strengthen its hold on Area C, to further exploit the area’s resources and achieve a permanent situation in which Israeli settlements thrive and Palestinian presence is negligible. In doing so, Israel has de facto annexed Area C and created circumstances that will leverage its influence over the final status of the area. 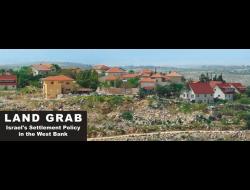