If You Build It, They Will Come

While the news are full of the plans to annex the West bank and legalize construction in settlements – Israel is busy creating facts on the ground, as usual. Annexation or not, Israel has been demolishing homes in the West Bank and trying to drive Palestinians out of their homes for decades. These attempts to take over the coveted land are carried out in utter indifference to the severe damage to Palestinians’ property, livelihood, water and power supply infrastructure they set up themselves, and their ability to plan their lives.

Some of these Palestinians are elderly, some are parents, and most of them own land. The one thing they do not have, which Israel makes sure they never will, is building permits. As they cannot build legally, these residents are forced to live in uncertainty, under constant threat that their homes will be demolished, their water and power supplies cut off, and their livelihoods taken away. Build another room to alleviate crowding in your home? The Civil Administration will swiftly tear it down. Lay a pipe to carry water from a spring to a field? The Civil Administration will soon slash it. Add a  classroom to the community school? It will be destroyed. Install a toilet donated to the community to improve hygiene? It will be confiscated. Build a tabun oven to bake bread? Forbidden. Put in a solar panel to generate a bit of electricity? Not allowed. From the beginning of the year through May 2020, Israel demolished 30 houses and apartments throughout the West Bank (including East Jerusalem). As a result, 130 people have lost their homes, including 68 minors. Another 112 non-residential structures (mostly cisterns and storage structures) were demolished. In East Jerusalem, 31 housing units were demolished, 26 of which were torn down by their owners after they received a demolition order. In total, 112 people, including 53 minors, lost their homes.

If you build It, they will come. 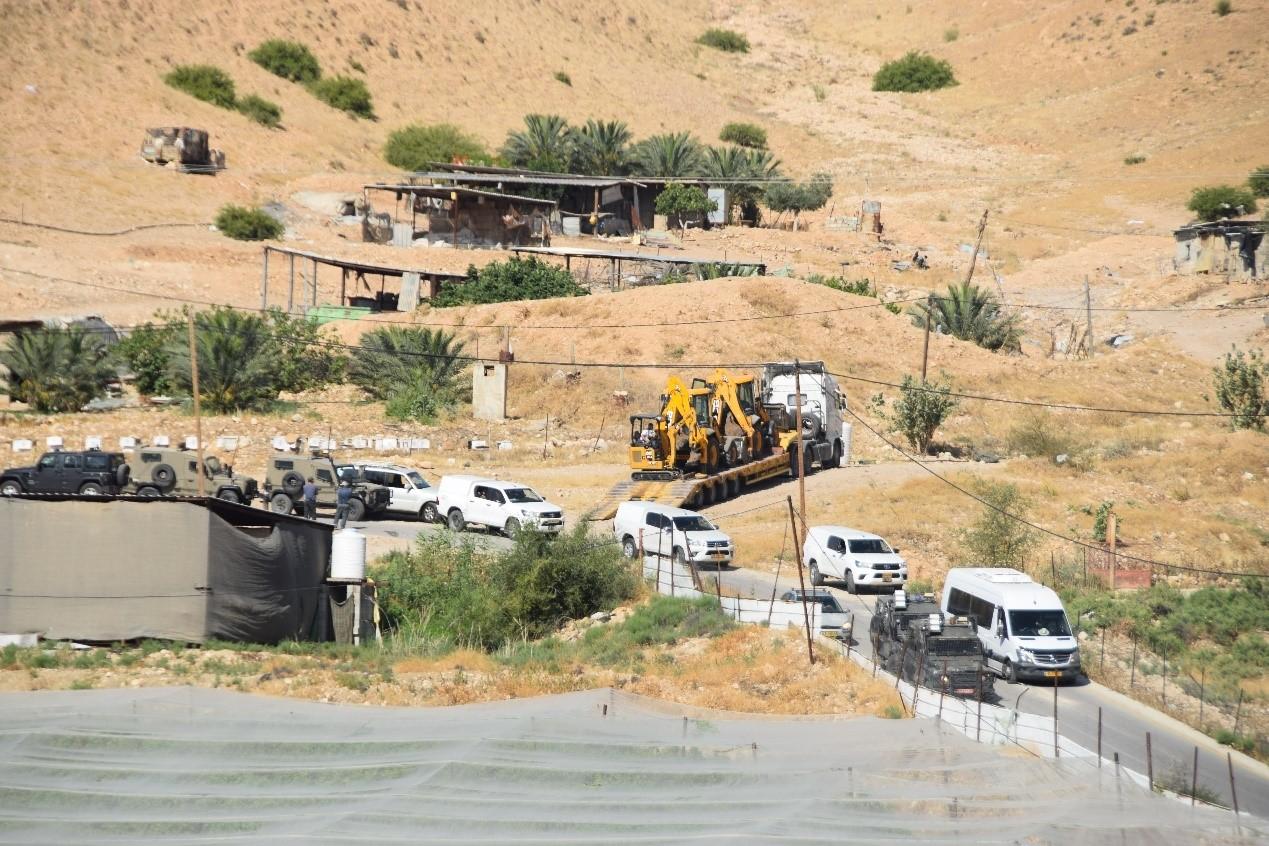 1 June 2020 – a convoy approaching Khirbet ‘Alan in the Jordan Valley. The same day, the Civil Administration confiscated a water pump and other farming equipment from the community. Photo: ‘Aref Daraghmeh, B’Tselem. Military and Israel Police forces escort Civil Administration personnel on their mission. They often show up early in the morning, unannounced. The convoy of demolition machines slowly drawing near leaves no room for doubt. Once you spot it, you know – someone from our community will lose something today. The scope of loss and damage are revealed only after the last jeep leaves. 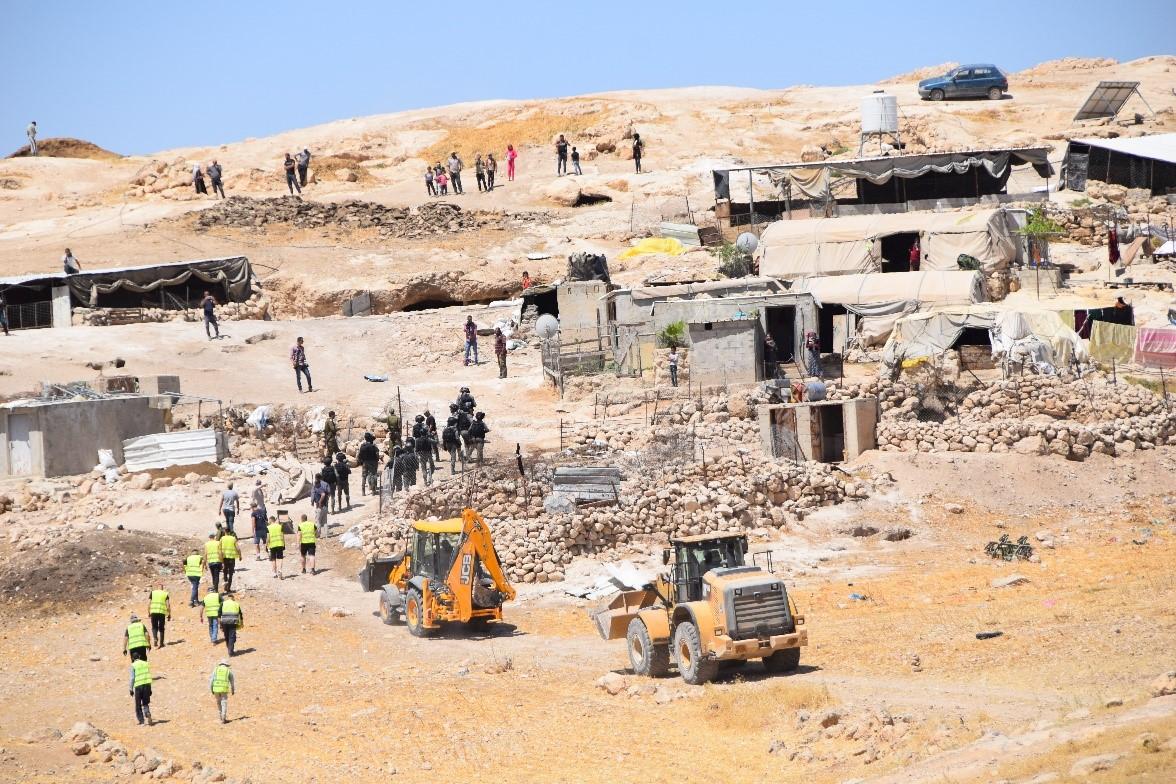 3 June 2020 – heavy machinery, Civil Administration personnel, soldiers and security guards go up to Khirbet al-Markez in the South Hebron Hills. The mission: demolish six homes built with EU funding. The result: 36 people, including 22 minors, homeless. Photo: Nasser Nawaj’ah, B’Tselem. The South Hebron hills are mostly inhabited by farmers who live off agriculture and herding. For many years, Israel has been eyeing their land and trying to drive them out. The European Union, which donates essential equipment and residential structures to Palestinian communities suffering confiscations and demolitions, has protested before Israel in the past about the confiscation and demolition of equipment it has provided. It has also warned that these actions will have implications for Israel-EU relations. Yet Israel continues with its demolition policy – without, as yet, any consequences. 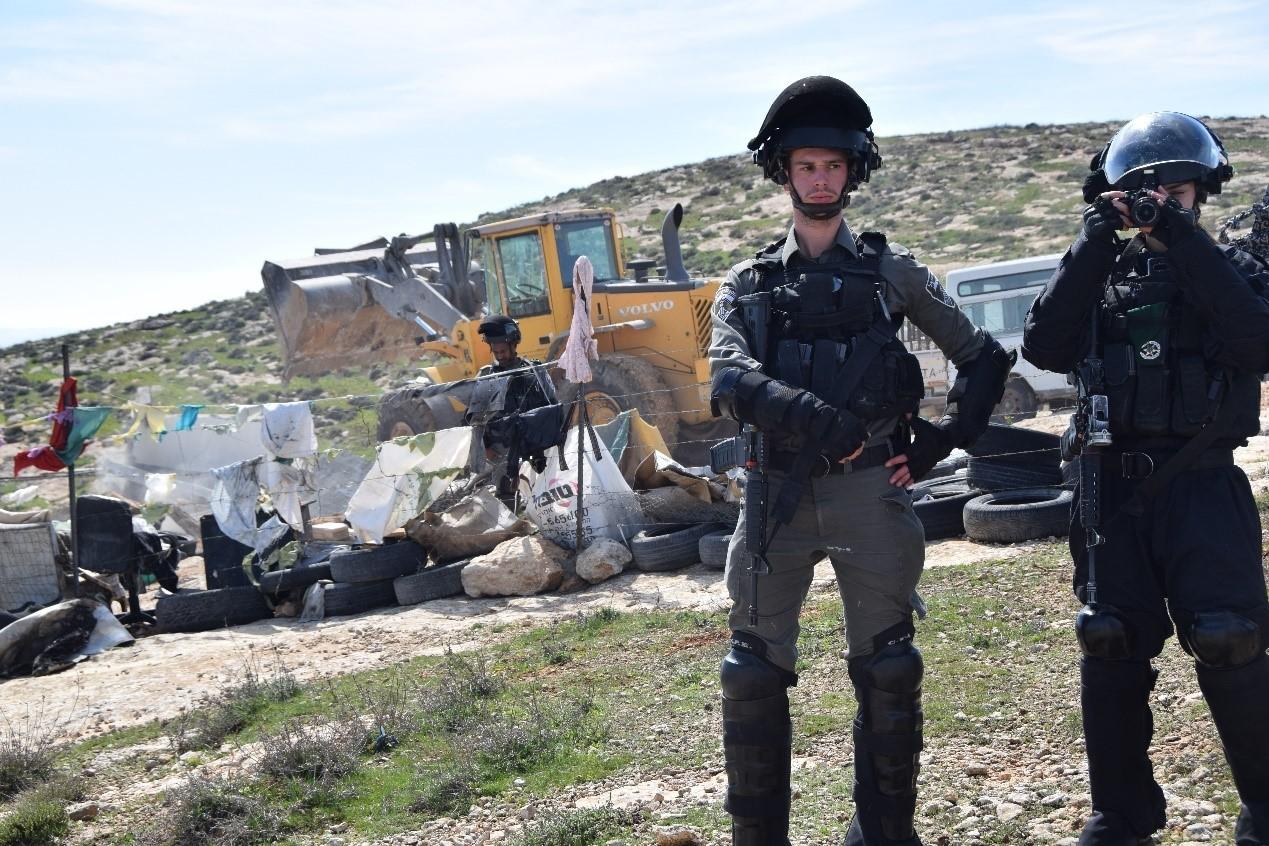 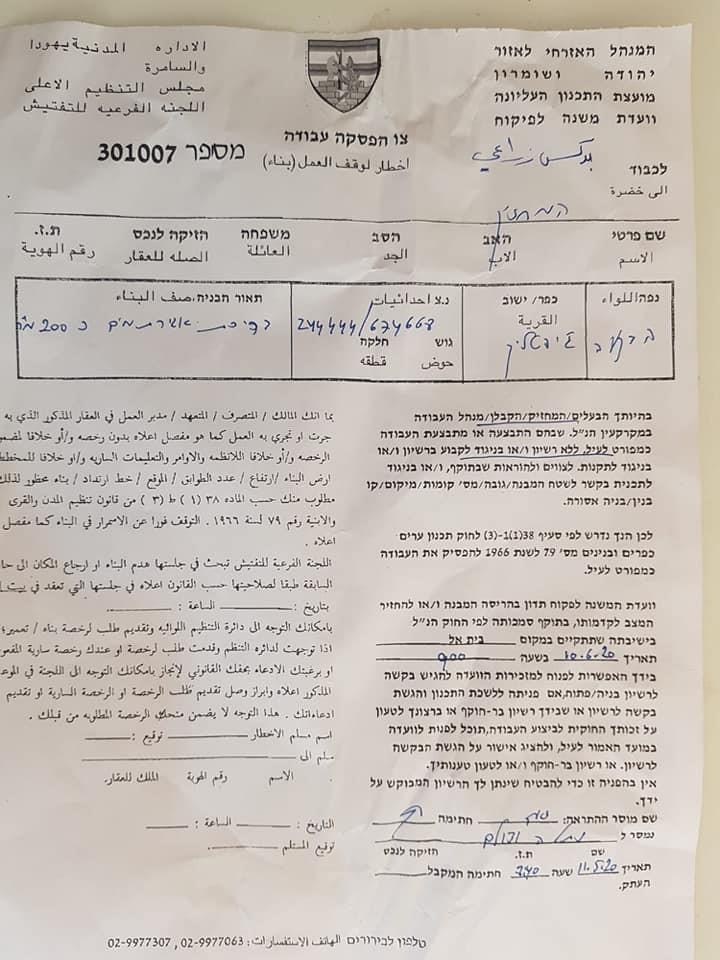 11 May 2020, Khirbet ‘Alan, southwest of al-Jiftlik, the Jordan Valley. A military "stop-work" order issued to a community resident for an old cistern built without a permit – which is impossible to obtain in the first place. Two community residents recently received “stop-work” orders for old cisterns used by farmers for many years. The cisterns have not yet been demolished, but irrigation systems have been destroyed and water-pipes confiscated. Israel forbids the community’s residents from connecting to the water system, so they are forced to provide alone for themselves and their livestock. Some residents purchase water in tankers, while others transport water from nearby sources and some collect water from pits and springs. 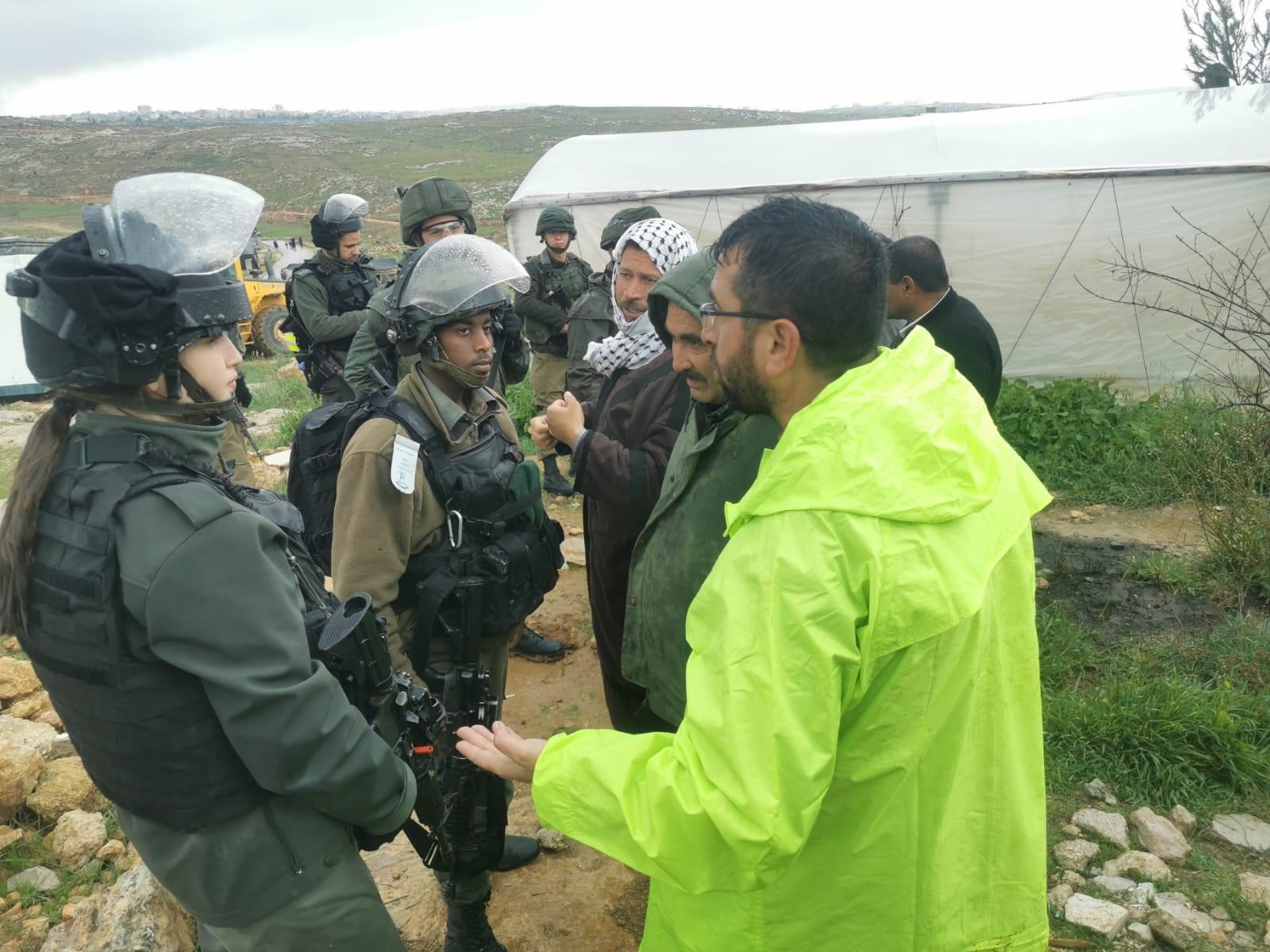 19 February 2020, Khirbet Susiya, South Hebron Hills. Residents try to comprehend why the large force that arrived with Border Police officers is set to confiscate a prefab used as a classroom for fourth-grade students. There are 47 students in the community’s school, ranging from first to ninth grade. Five children in the fourth grade used to study in the confiscated prefab. In the two weeks prior to the confiscation, the compound was renovated. The prefab was temporarily removed from the school and used for storing equipment. A resident who objected to the confiscation was arrested and released the next day after depositing bail. 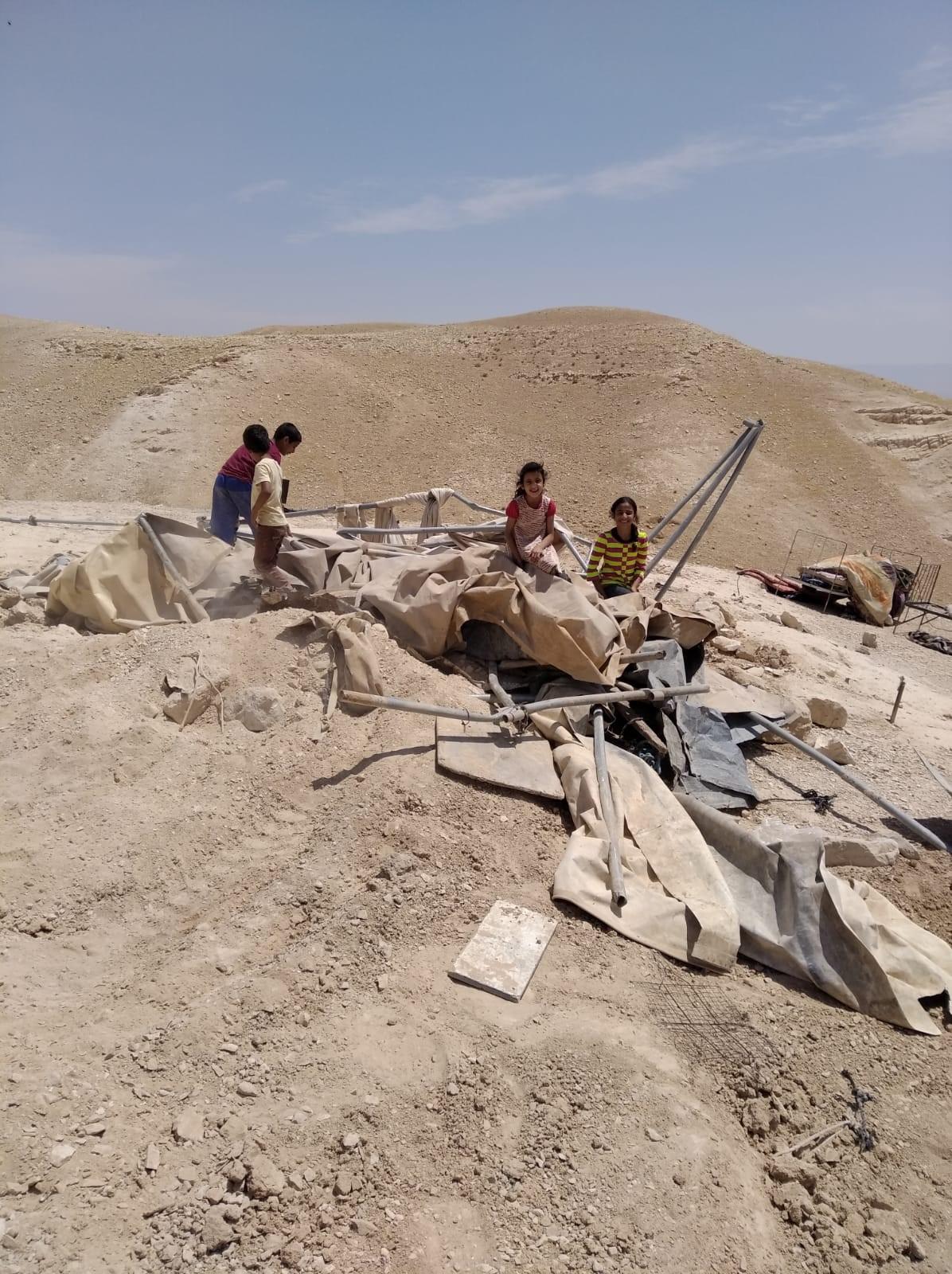 26 April 2020, Deir al-Qilt, south of Jericho. A tent that was home to a family of nine was demolished, leaving the family homeless. Three other tents – one used for seasonal residence, another as a kitchen and the third used as a livestock pen – were also demolished. Photo: ‘Aref Daraghmeh, B’Tselem. Many Palestinian communities suffer from repeated harassment by the Israeli authorities. Israel wants them to leave their homes, ostensibly of their own volition. Therefore, it creates intolerable living conditions, to force the residents to leave. This policy is primarily aimed at communities in the South Hebron Hills, the Jordan Valley and the Ma’ale Adumim area. Most of the residents make a living from herding. 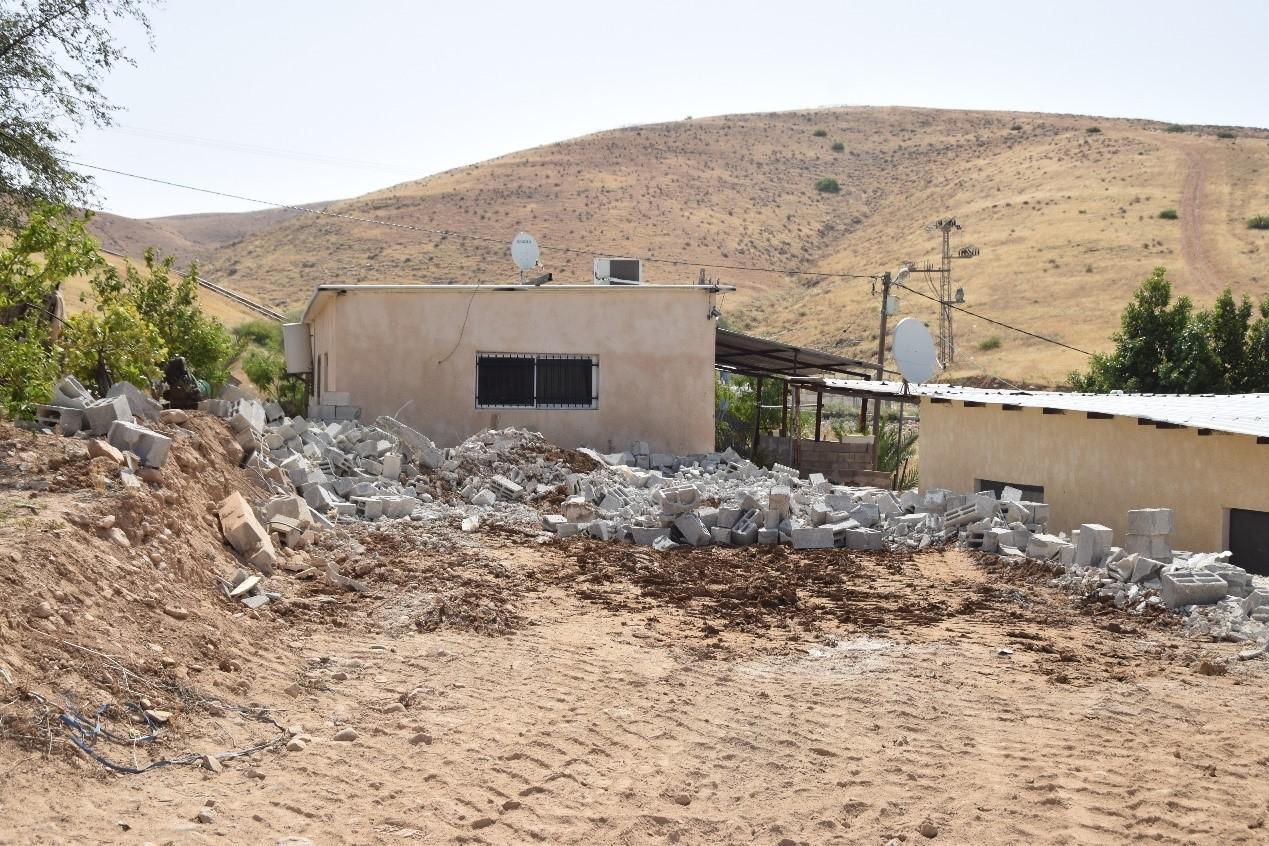 27 May 2020, Furush Beit Dajan, the Jordan Valley. A house under construction, owned by a village residents, demolished. The occupant was about to get married and planned on starting life with his family in their new home. Israel had other plans. Photo: ‘Aref Daraghmeh, B’Tselem. The sight of a brick pile where a house once stood is all too familiar to the community. This time, the demolition left a groom without a roof over his head and ruined the future he was planning for his new family. 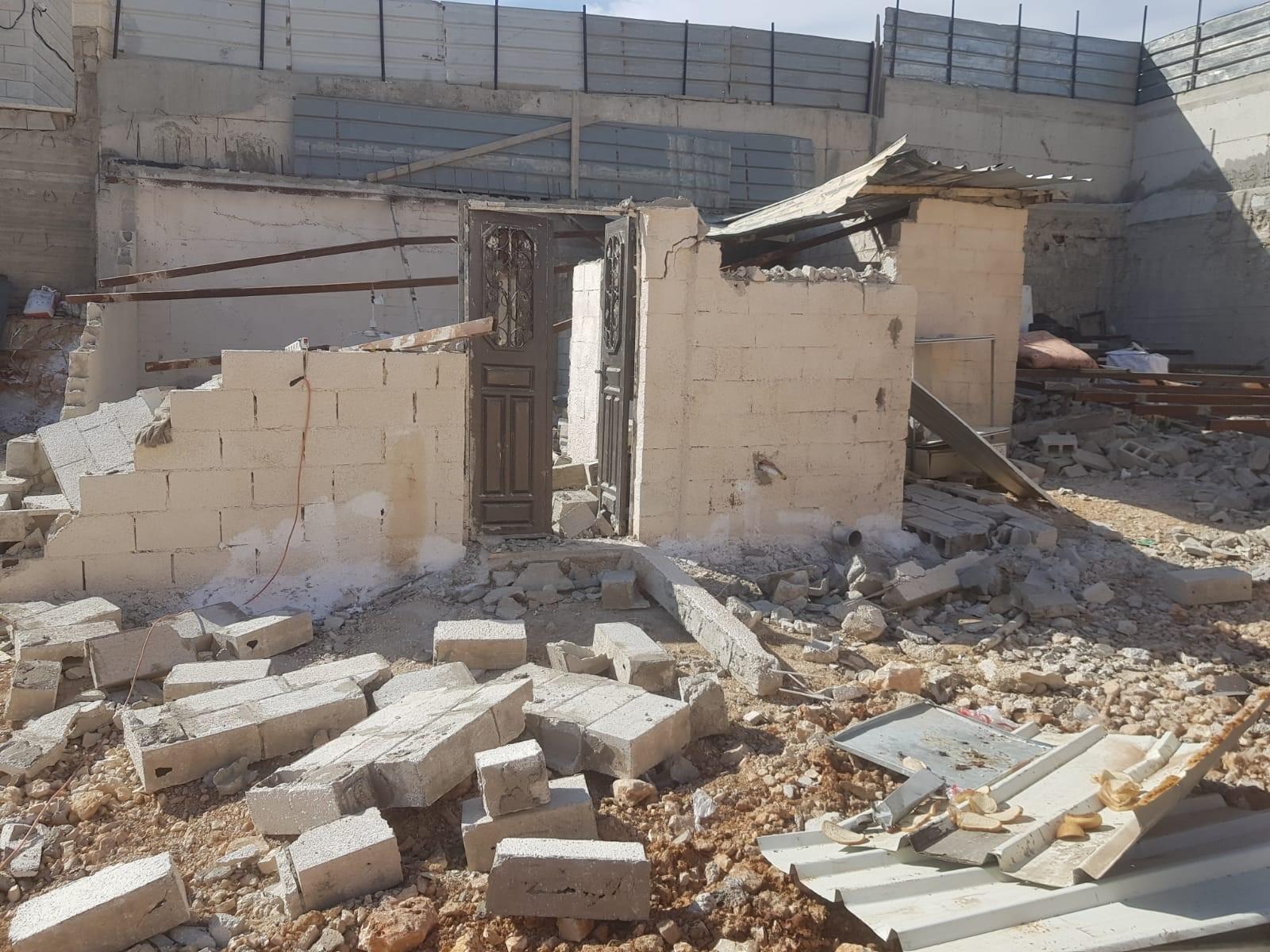 Beit Hanina, East Jerusalem, 8 June 2020. The Jerusalem Municipality offers Palestinian residents of Jerusalem two options: to demolish their own homes or wait for the municipality’s heavy machinery to do it. The latter will force them to pay huge fines. Photo: 'Amer 'Aruri, B'Tselem. 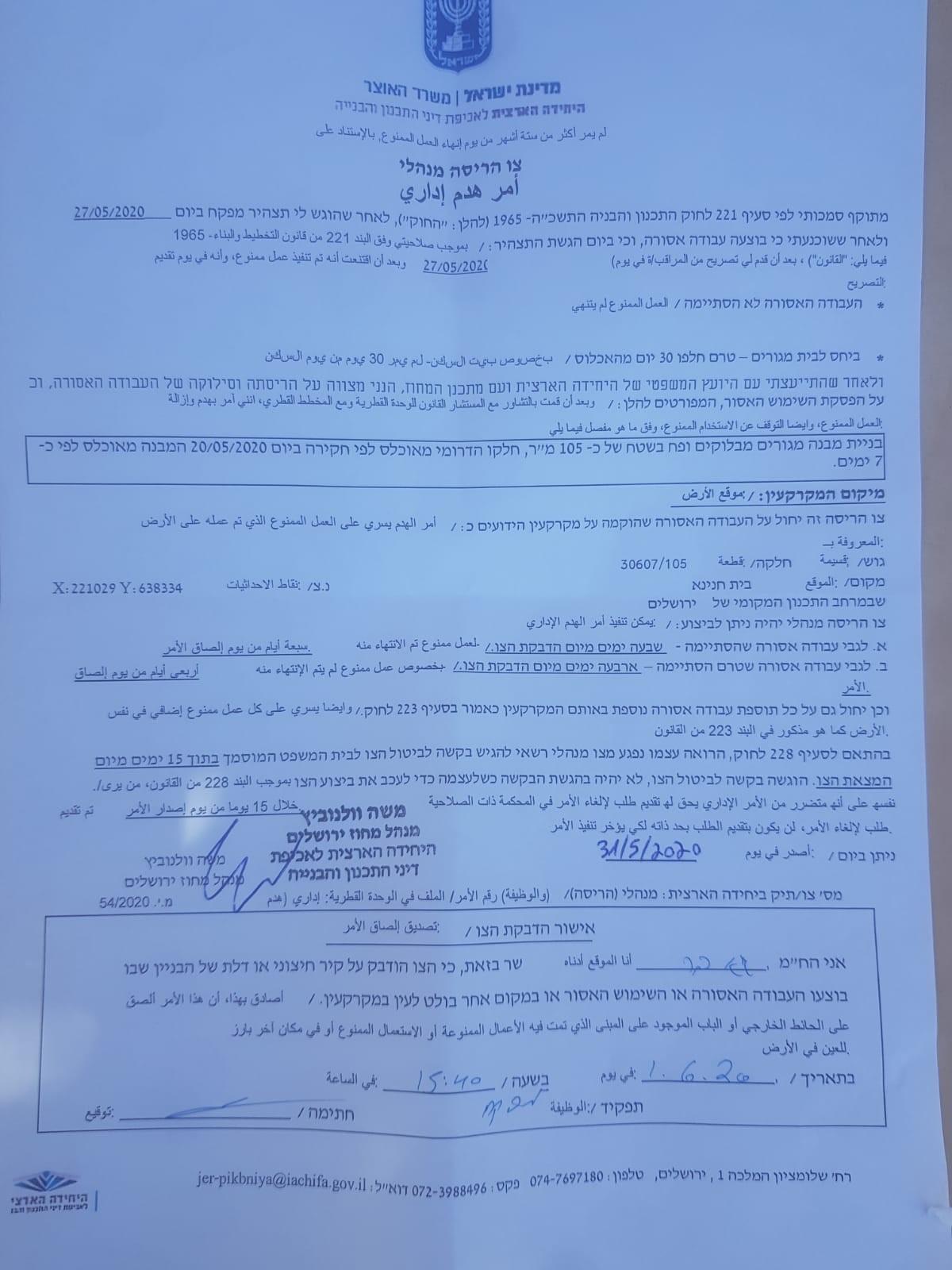 In this case, a family of five members demolished their own home, which was still under construction. 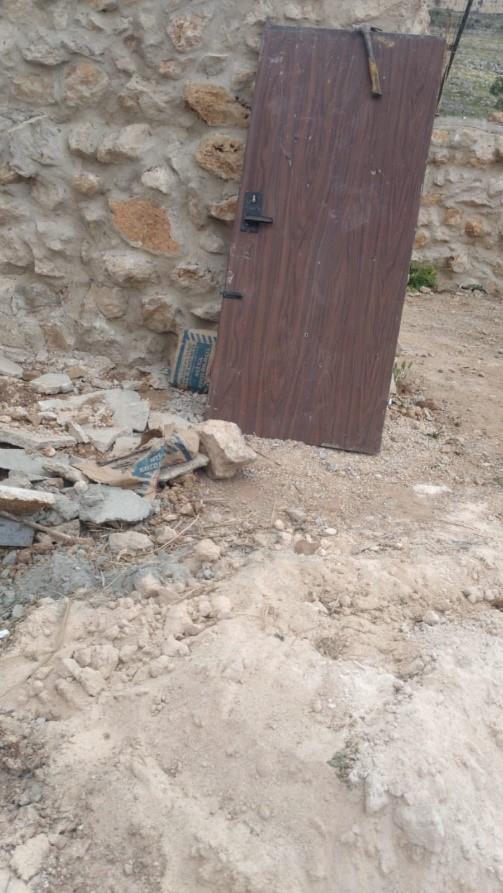 1 May 2020 – another self-demolition of a home in Beit Hanina. Here stood the home of a family of four. 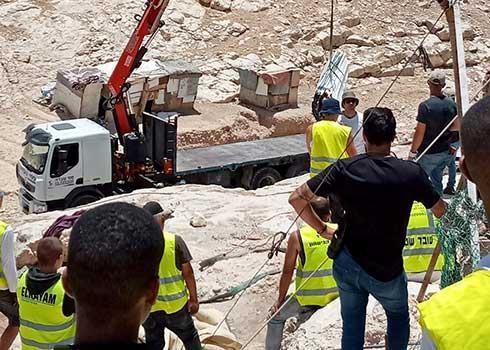 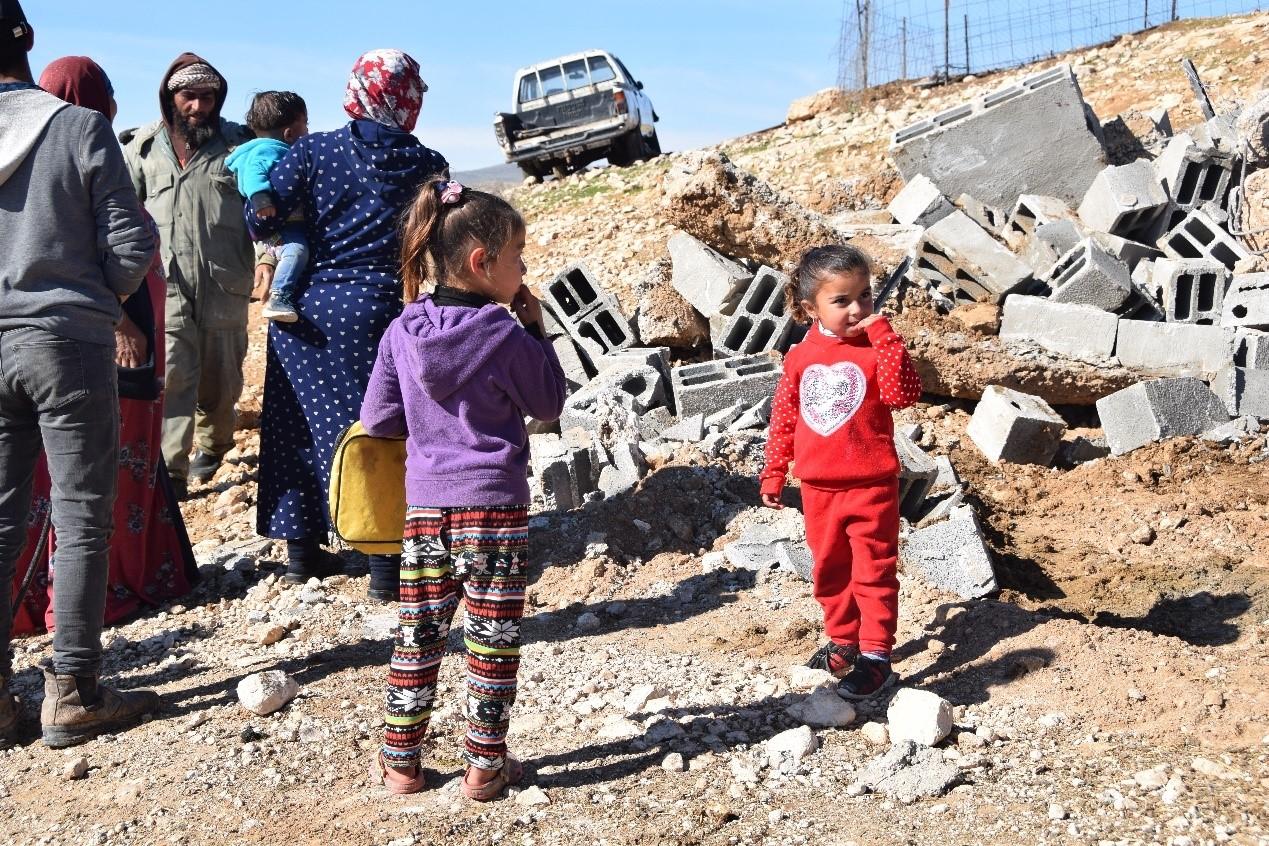 27 February 2020 – Khirbet a-Saffai al-Foqa, Masafer Yatta, South Hebron Hills. Here, a livestock pen once stood. The residents of Masafer Yatta are well acquainted with these sights and sounds, as well as the silence that comes after the demolition. The demolitions are backed by all the Israeli authorities, including, in some cases, the Israeli High Court of Justice – even though the residents have nowhere to go or any legal way to build a home.