Over the past decade downtown Hebron has become a ghost town. Israel has enacted a strict segregationist policy there, enforced by imposing stringent restrictions on Palestinian pedestrians and vehicles, closing shops and businesses, and not safeguarding Palestinians from settler violence. As a result, many residents have left their homes and entire neighborhoods located near homes of Israeli settlers are entirely deserted. Hebron’s markets and main streets have grown desolate. Those individuals who have not left downtown Hebron are among the weakest and most marginalized members of society. With no option of moving away, they regularly encounter both an increased and more violent presence of Israeli security forces as well as settler violence. Finally, they must face their isolation from the rest of the city of Hebron.

One of B’Tselem staff members joined the tour. Below are some of her photos: 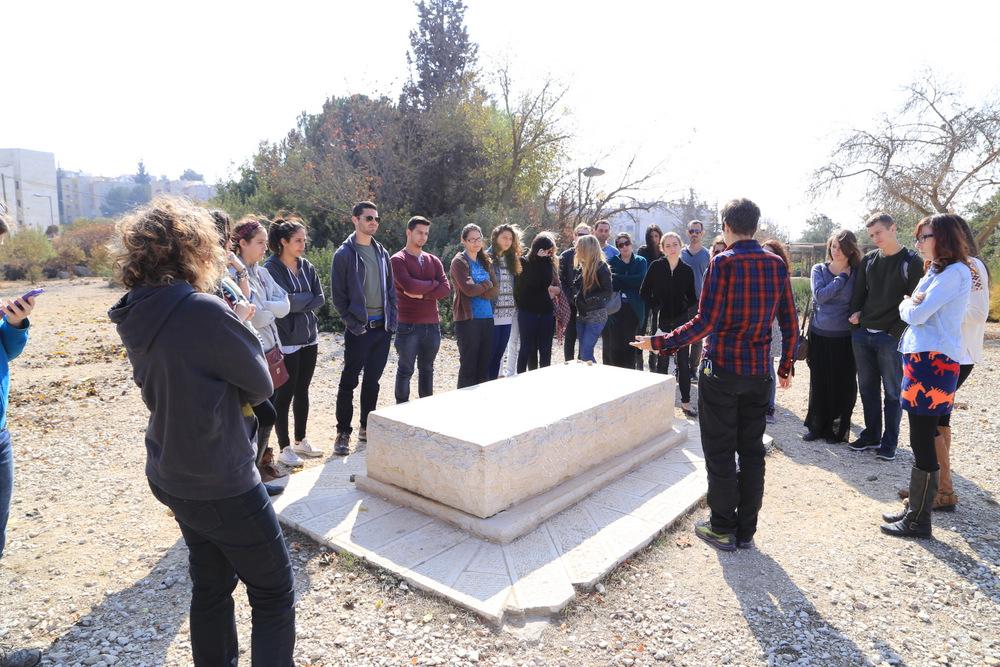 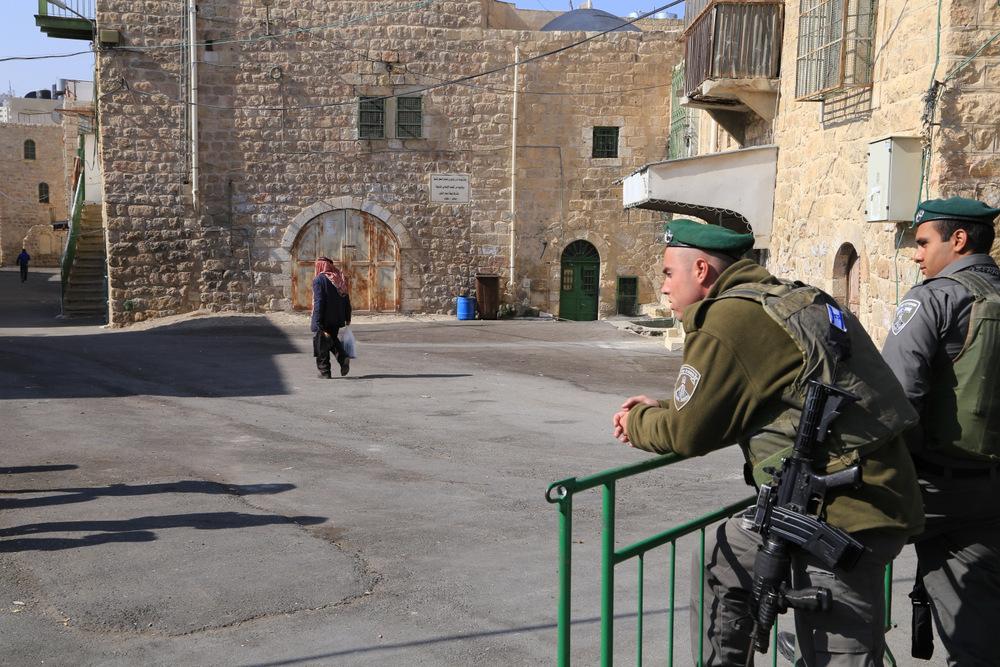 Border Police officers at a checkpoint near the plaza outside the Tomb of the Patriarchs. 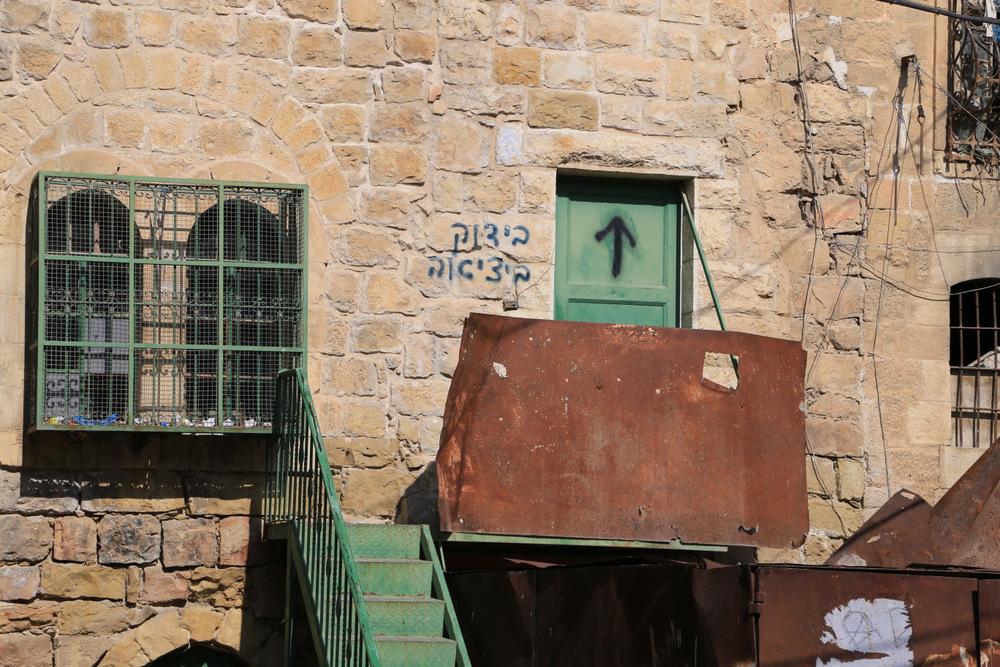 A Palestinian home whose occupants installed screens on their windows to shield them from object thrown by settlers. 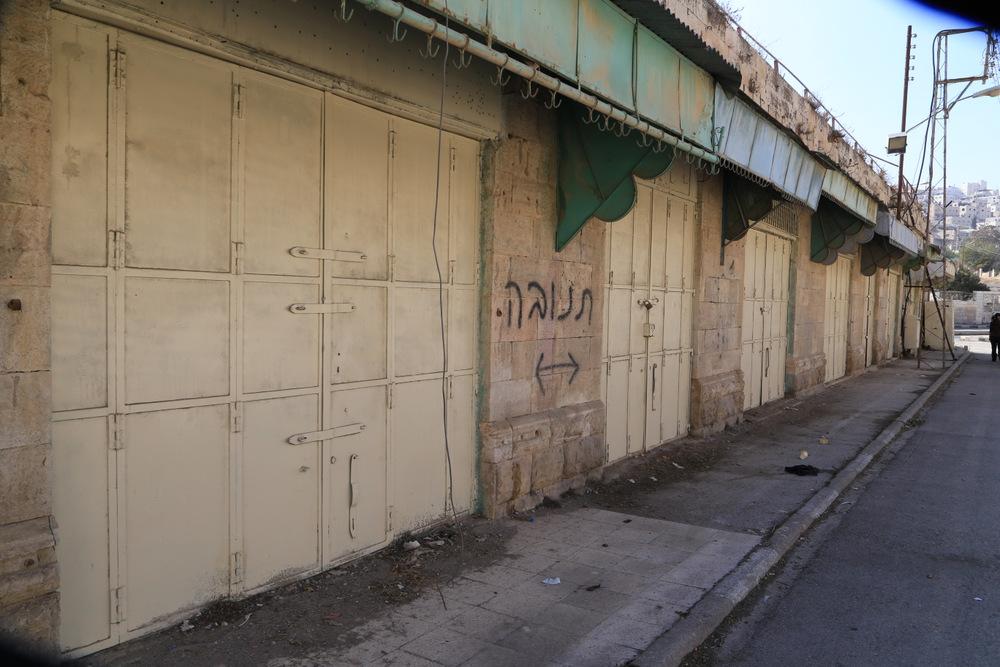 Row of Palestinian stores on a-Sahleh St. The stores were shut down by the Israeli military about ten years ago. 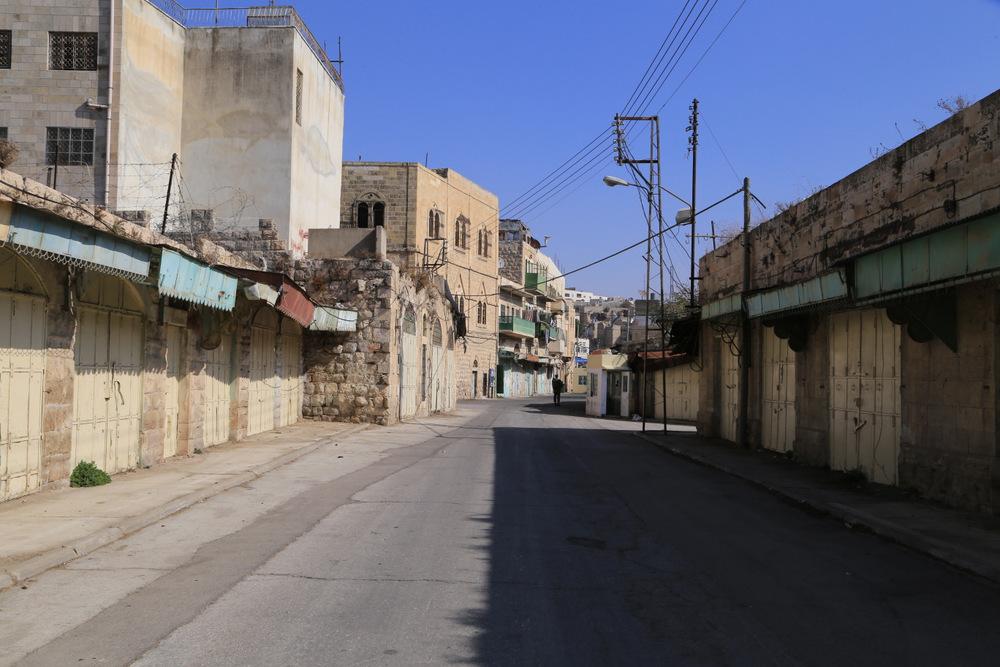 View towards a-Sahleh neighborhood. The Avraham Avinu settlement was established near the Palestinian neighborhood, which is now practically uninhabited 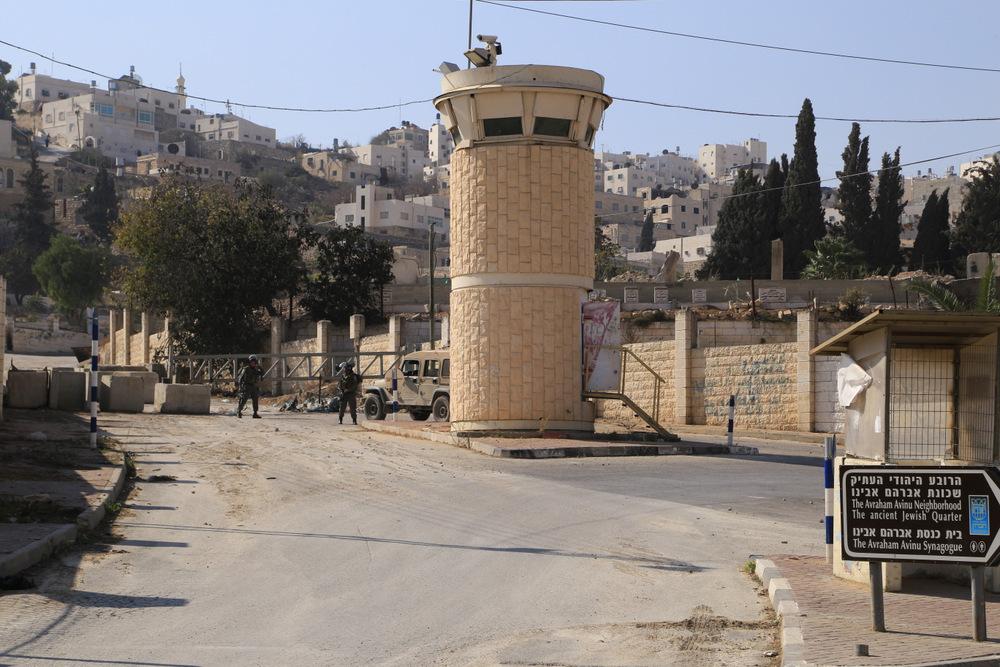 Foreground: Military guard tower at Aharon Gross Square. The square is named for a yeshiva student killed by Palestinians in 1983. Background: the Palestinian neighborhood of Abu Sneineh. The military does not allow Palestinians to enter the square which leads to a-Shuhada St., a main street. 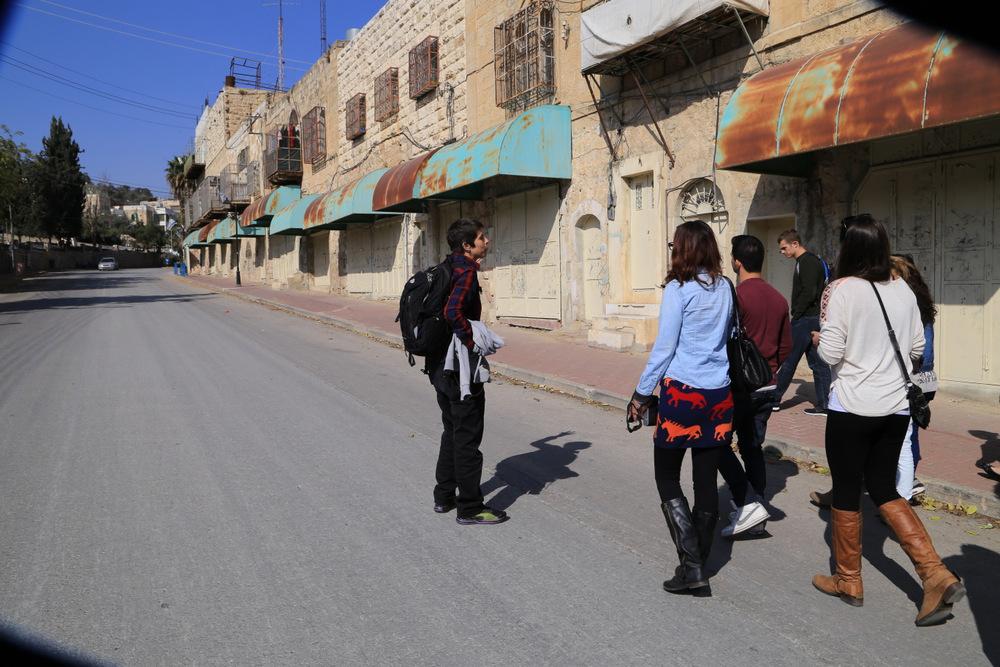 A-Shuhada St., one of the main roads in downtown Hebron. Israel’s security forces do not allow any Palestinian traffic in the area. Palestinians, even pedestrians, are not allowed to take the road reserved for settlers. The military has blockaded the doors of the buildings that face the street, forcing the few Palestinians still living there to find an alternative way to exit their homes. 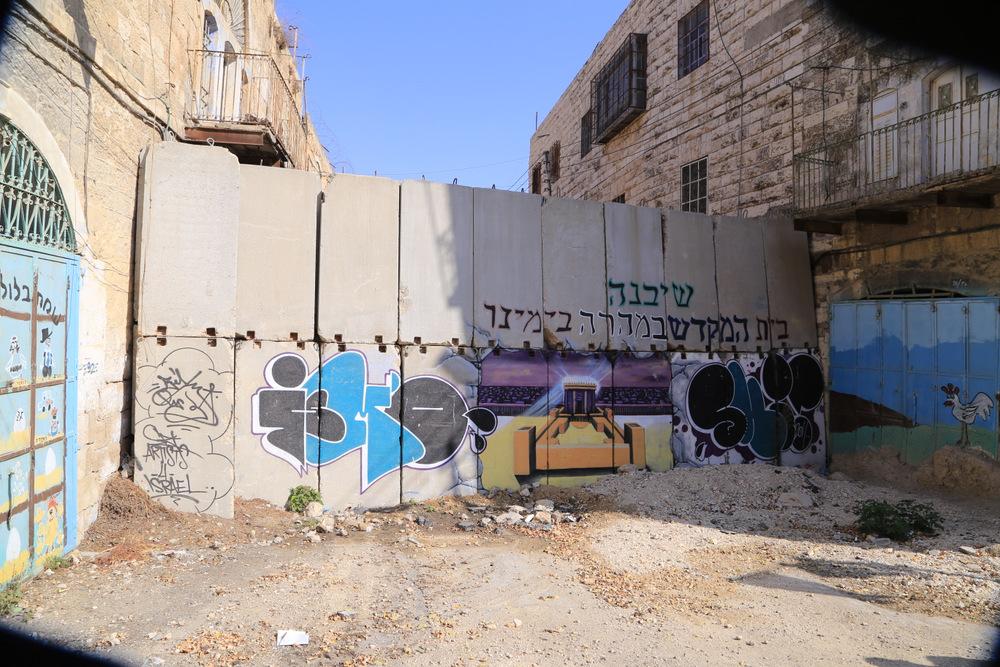 Cement wall built by the military to divide a-Shuhada St. from the Qasbah of Hebron. 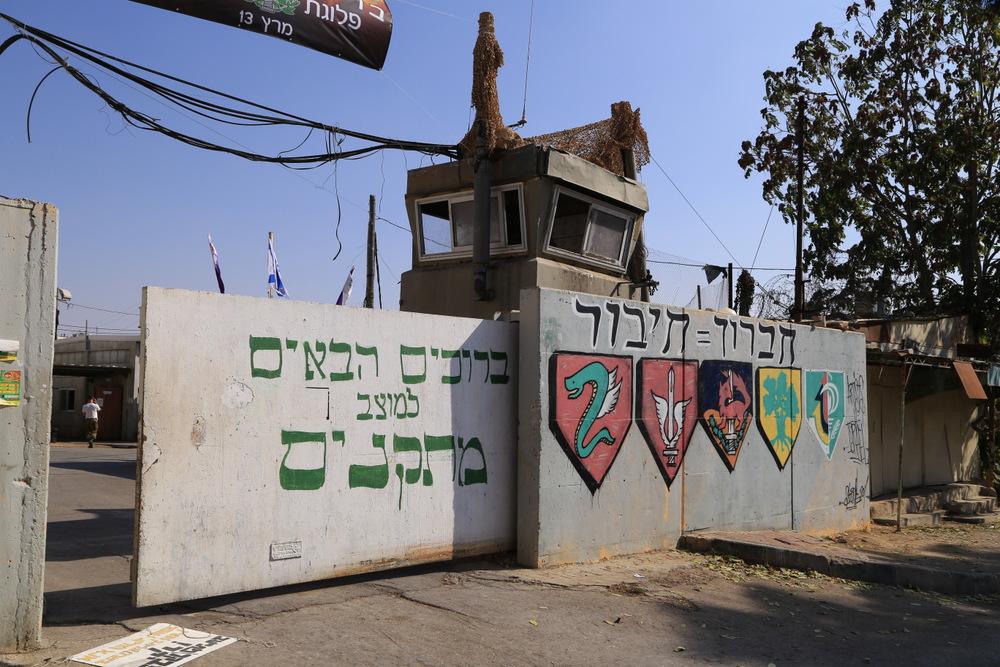 Military outpost on the site of Hebron’s central bus station, which the military closed in the early 1980s. There are also settlers who live in the outpost. 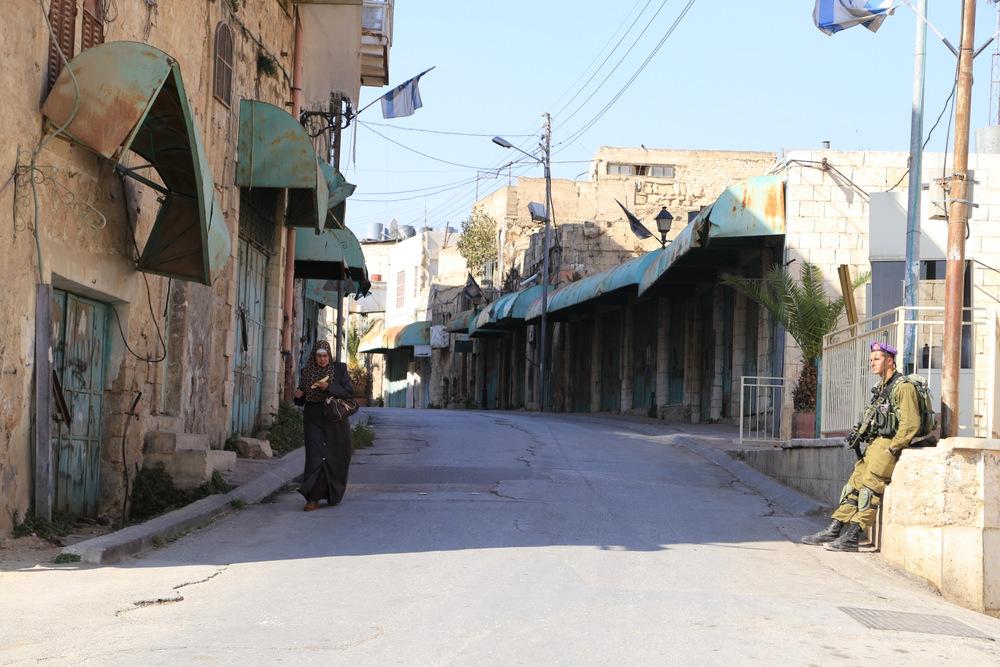 A soldier stationed at a checkpoint on a-Shuhada St. The checkpoint serves to separate the upper part of the street – where Israeli security forces permit Palestinians to travel on foot, but not by car and not to open stores – and the lower section which is prohibited even to Palestinian pedestrians. 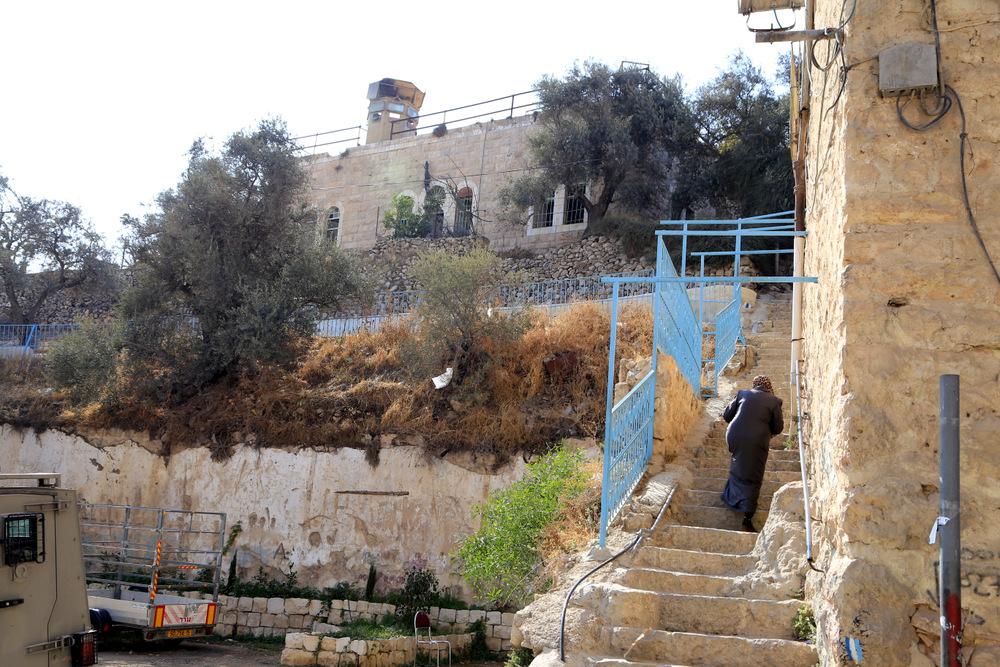 Stairs used by Palestinians as a bypass to a-Shuhada St. 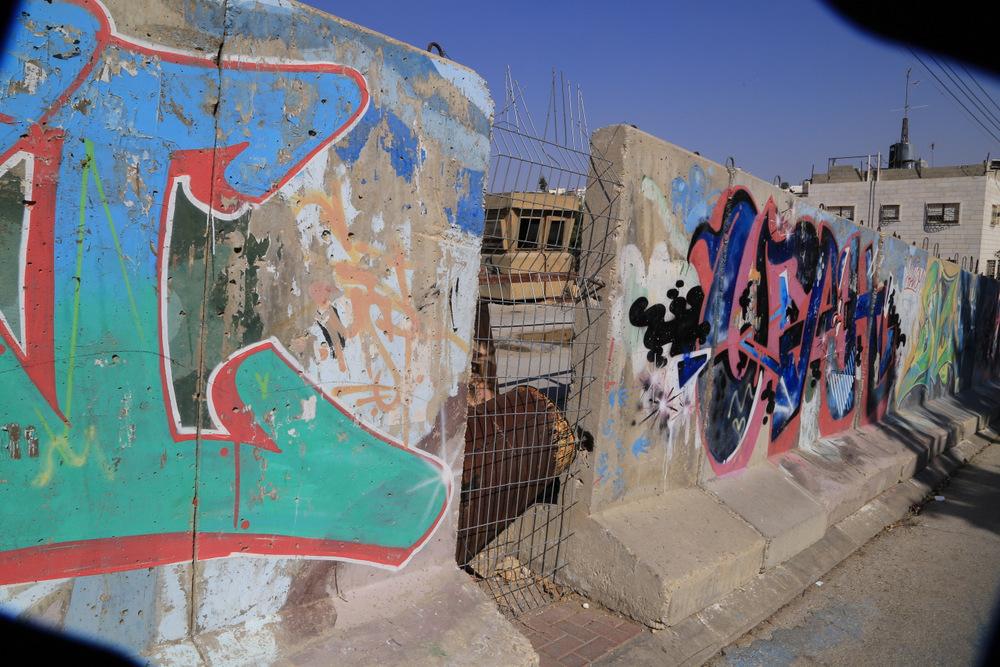 Graffiti on a cement wall in Tel Rumeidah neighborhood. The military post in the background is located on the roof of the home of ‘Imad and Faizah Abu Shamsiyeh, volunteer photographers in B’Tselem’s camera project.