Al-Jalazun R.C., life in the shadow of the settlement of Beit El

Al-Jalazun Refugee Camp is located north of Ramallah. It was set up in 1949 as a temporary housing solution for Palestinians who became refugees during the 1948 war and were not allowed by Israel to return to their homes after the war ended. Residents of the camp originate from 36 Palestinian villages around Lod, Ramla, Haifa and west of Hebron. The camp is run by UNRWA and today, seven decades after the camp was established, the agency has 14,579 refugees registered as residents of al-Jalazun R.C., including 5,151 minors under the age of 18.

The official borders of the camp stretch over 25.3 hectares of land that was leased from residents of the village of Jifna in 1949 for a term of 99 years. The land is located west of Road 466, which connects the camp to the town of al-Birah to the south. Natural population growth has exhausted land for construction inside the camp, and some residents have purchased land outside the camp’s official borders from residents of nearby villages (Dura al-Qara’, Jifna and al-Birah) and built their homes there.

Three neighborhoods were built on land bought outside the camp – Iskan a-Zar’a, Jabal a-Dik and Dahiyat a-Tarbiyah wa’a-Ta'lim. They are home to some 2,000 people, most of them refugees registered as al-Jalazun residents. Although UNRWA only supplies municipal services (such as waste collection and infrastructure development) within the official boundaries of the camp, it provides humanitarian services (health and education) to all camp residents, including those who moved to these neighborhoods.

UNRWA has built two schools at the main entrance to the camp, outside its official borders and on land belonging to the village of Jifna. The schools serve some 2,000 students.

In 1977, the settlement of Beit El was built near the camp, east of Road 466, on land privately-owned by residents of al-Birah and of the villages ‘Ein Yabrud and Dura al-Qara’. Israel took over these lands in 1970, using a military seizure order that cited “security needs” as the grounds and covered an area of 242.6 hectares (Order 1/70). About a year later, landowners petitioned the High Court of Justice against the seizure and the building of the settlement. The petition was dismissed after the justices accepted the state’s argument that this was not a permanent change and that building temporary civilian settlements in the Occupied Territories contributed to security. Several months after this judgment was issued, the High Court delivered its ruling in the Elon Moreh petition – a turning point after which Israel preferred to build settlements on seized land by classifying it as “state land”, based on a manipulative interpretation of the law. The land seized under Order 1/70 was used to build not only settlements but also military bases. Over the last five years, soldiers have entered the camp once a week on average; roughly 160 Palestinians have been injured by live ammunition Israeli troops fired (according to figures provided by the UN Office for the Coordination of Humanitarian Affairs - OCHA); and six, including four minors, have been killed by Israeli security forces.

The northern boundary of the settlement is now only 15 meters away from the neighborhood of Iskan a-Zar’a, and to the west it is only 180 meters away from the camp’s school for boys. This proximity results in permanent military presence in the area, in observation towers and patrols along Road 466 and the area between the road and the settlement. Soldiers frequently clash with camp residents, mostly boys and young men. The altercations usually take place at the entrance to the camp, near the schools, and often involve use of crowd control measures. In some cases, the soldiers use live fire. Over the last five years, soldiers have entered the camp once a week on average; roughly 160 Palestinians have been injured (according to OCHA figures), and six have been killed, four of them minors, by live ammunition fired by Israeli forces.

Over the years, the military has imposed sweeping travel restrictions on camp residents. In 2000, in the early days of the second intifada, the military blocked off the section of Road 466 that runs between the town of al-Birah and the camp, forcing Palestinians from the camp and from neighboring villages to take bypass roads into Ramallah. In 2011, the military reopened the southern section of the road – about 1.3 kilometers running from the northern entrance to al-Birah (near the City Inn Hotel) to some 130 meters from the old southwestern entrance to the settlement of Beit El. This did not affect the freedom of movement of camp residents, as they have to cross the northern section of the road to reach the southern part. In 2012, the military also reopened the northern section, a 1-km stretch of road that runs from the old entrance to the settlement to about 200 meters away from the main entrance to the camp. This should have allowed al-Jalazun R.C. residents to travel freely along the road, but the military has since temporarily blocked off sections of the road, on various pretexts and for durations ranging from one day to several months. These blockages are particularly disruptive for the roughly 2,000 camp residents who work in Ramallah and al-Birah and use this road for their daily commute.

The camp itself is severely overcrowded, and residents have exhausted all construction opportunities. The land outside the camp, where the new neighborhoods and the schools were built, was classified as Area C in the Oslo Accords. Israel maintains all planning, building and development powers in this area and withholds development opportunities from Palestinians. Camp residents who wish to build or extend their homes in these neighborhoods are faced with Israel’s blanket refusal to issue building permits for Palestinians in Area C. The Civil Administration issues demolition orders for homes built, for lack of any other choice, without permits in Area C. Whether the orders are executed or not, their threat looms constantly over the residents.

Israel treats the camp’s residents as unwelcome guests in their own homes, refusing to shoulder its responsibility for them. By prohibiting development, it is forcing the growing population to remain crowded within the boundaries set for the camp 70 years ago. Meanwhile, it uses the land of nearby Palestinian communities for its own ends, including settlement expansion, and prioritizes the settler interests while ignoring the rights of the Palestinian residents. This is how the regime of occupation operates in al-Jalazun Refugee Camp – and in the rest of the West Bank. 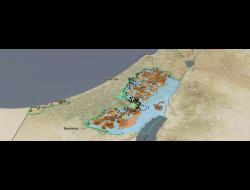