On Saturday, 12 May 2021, at around 3:00 A.M., dozens of soldiers raided al-Fawwar Refugee Camp, which lies south of Hebron, seeking to arrest three residents who live in three separate houses. The soldiers entered the camp firing shots in the air and hurling stun grenades. During the raid, which lasted about 15 minutes, young Palestinians threw stones at the soldiers from alleys near the houses they entered, and on their way in and out of the camp.

The soldiers entered three homes to arrest a single occupant in each. In two, they arrested the person they were seeking and left immediately. In the third, the home of the Abu Hashhash family, the soldiers arrested Muhammad Abu Hashhash (49). They led him away about 10 minutes later, but several soldiers remained on the roof of the building. One of the occupants managed to warn the neighbors that the soldiers were there, just before they started firing live bullets and 0.22-inch-caliber bullets at several residents who were standing on nearby rooftops, balconies and streets. The soldiers injured four people and killed Hussein 'Atiyyah Titi (27), who was hit in the chest while on his roof. On their way out of the camp, the soldiers fired at a Red Crescent ambulance that was evacuating one of the wounded persons, and punctured its tires.

Hiding behind the wall that surrounds the Abu Hashhash home in the dead of night, without the neighbors knowing, and opening fire from there at residents who posed no risk – some were merely watching the other soldiers leave – was unjustifiable and conveys, yet again, the military's blatant disregard for Palestinians’ lives. According to media reports, an MPIU investigation has been launched. Yet years of experience show that the purpose of such investigations is not to uncover the truth, but rather to whitewash killing and justify the use of violent means to perpetuate the occupation.

Hussein' Atiyyah Titi's brother, 'Omar (30), was woken around 3:00 A.M. by the sound of gunfire and whistling. Shortly afterwards, his brother Hussein came to his apartment. When the two brothers heard that soldiers had arrested Muhammad Abu Hashhash, they went up to the roof. In a testimony he gave B'Tselem field researcher Musa Abu Hashhash, ‘Omar Titi described what happened next:

We were standing on the roof and it was pretty dark. I heard people on nearby rooftops saying that the soldiers were retreating and that Muhammad was with them. I couldn’t see those soldiers, or any soldiers on the Abu Hashhash family's roof, because the house is surrounded by a concrete wall and also because it was dark.

My brother Hussein went immediately to the western edge of the roof and bent down to see the soldiers. There are no buildings obscuring the view there, so you can see better. I was standing two meters behind him.

Suddenly, I heard a bullet whistling, and then I saw Hussein take a few steps back and fall down next to me. He said, "They’ve hit me." He was bleeding from his left shoulder, and I realized he was injured. I yelled loudly, "Hussein's been hit!" I realized right away he was very badly wounded because he wasn't moving. But I told my brothers and parents, who had come up and were standing by the wooden stairs leading to the roof, that he was only injured in the leg because I wanted to reassure my mother, who was crying and screaming.

My brother Isma'il and I, along with a few other guys who came to help, carried Hussein with great difficulty down the wooden stairs leading to the building's stairway. We went all the way down to the street and put Hussein in a private car that took him to the Red Crescent emergency center in Dura. I drove behind it. When I got there, they told me that Hussein had arrived lifeless.

A.Z. (21) and two of his uncles went up to the roof of their grandfather's home, about 50 meters from the Abu Hashhash home, after hearing about the arrest of Muhammad Abu Hashhash. A short while later, the uncles went back down and A.Z. remained alone on the roof. In a testimony he gave B'Tselem field researcher Musa Abu Hashhash on 7 June 2021, he recalled:

I went up to the roof with my uncles to film the soldiers retreating. I turned on the flashlight on my phone because of the dark. After a few moments, my uncles went back down and asked me to go with them. I couldn’t see anything. The street was quiet and empty. I tried to go to the edge of the roof overlooking the street to see better. Just then, I was hit in the right thigh and fell over. My leg was bleeding. I tried to call out to my uncles, but nobody heard me. I tried to crawl towards the stairs, but couldn't make it. After about 20 minutes, my two uncles came back up to the roof and found me. They carried me down to the apartment one of them lives in and tried to bandage the wound to stop the bleeding. About 10 minutes later, an ambulance came and took me away.

On the way to the hospital, the ambulance drove to the camp’s main entrance. I was lying on a stretcher. Suddenly, the ambulance stopped. I heard gunfire but didn't know what was happening. Then I heard people talking near the ambulance and heard the door open. After a few minutes, my uncles and the ambulance driver transferred me to a private car that was standing behind the ambulance, and its driver took me to hospital. The tests at the hospital found that a bullet had penetrated the muscle in my right thigh, but the bone wasn't damaged. I was treated and discharged around midday.

Ambulance driver A.D. (35) came to the refugee camp to evacuate the wounded and started driving the injured A.Z. to hospital. In a testimony he gave B'Tselem field researcher Musa Abu Hashhash, he recounted what happened during the ride:

When we were about 50 meters from the entrance to the camp, soldiers who were by the roadside suddenly jumped into the middle of the road. They aimed green and red lasers at us and before I could think, I heard massive, rapid gunfire to the front of the ambulance. For a few terrifying moments, I thought the soldiers were going to shoot me, too, or that they'd already shot me. I started reciting the Shahada prayer and saw that the crew member sitting next to me was also reciting it.

I felt that the ambulance had been hit. Before I could get over the shock and panic, a soldier came over to the ambulance and ordered me to turn the ignition off. He told me to hand over the keys and get out. I got out, and the soldier led me to the left side of the street, about 15 meters away from the ambulance. Then he ran towards the camp's entrance, where a Palestinian Red Crescent ambulance had just arrived from Hebron to evacuate the wounded people. The other soldiers went towards the military watchtower by the camp’s entrance. I was very worried about the injured guy I’d left in the ambulance. After a few minutes, a private car drove up and stopped behind the ambulance. A few moments later, it turned around and drove off.

I didn't understand what was going on. About 15 minutes later, I went back to the ambulance. I asked my crew member about the wounded man, and he told me he’d been transferred to a private car that took him to hospital. About two minutes later, two residents of Yatta came to the camp's entrance in their cars and one of them handed me the keys to the ambulance, which he’d found lying on the main road. I checked the ambulance and saw that the front tires were flat from the shooting. There were also bullet marks in the front part.

Meanwhile, a private ambulance arrived. The crew helped me change the two front tires and then we drove off. The Red Crescent ambulance was still standing where it had stopped earlier. Its driver told me the keys were on the roof and that the soldier had forbidden him to touch them without permission. We drove back to the first aid center. It was one of the harshest, most dangerous incidents I've ever experienced. When I think back to the laser lights shining in my face and the sounds of the gunfire, I can't believe I'm still alive. 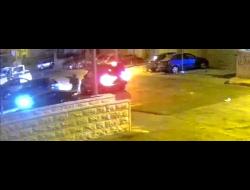 Video footage shows Israeli special police unit carrying out targeted killing of Ahmad ‘Abdu, a Palestinian sitting in his car and endangering no one 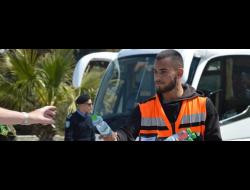