Since the beginning of November 2017, the Israeli military has been imposing harsh travel restrictions on the Palestinian communities of Masafer Yatta in the South Hebron Hills. At first, the military blocked several roads in the area with dirt piles and rocks. Later, after residents removed some of the roadblocks, the military dug deep, wide ditches across the roads that prevent any sort of access by vehicle.

The residents of Masafer Yatta have been suffering incessant harassment by Israel for decades. Israel does not allow them to connect to infrastructure and repeatedly demolishes their homes, in an attempt to drive them out of the area. Forcible transfer of residents constitutes a war crime. This will hold true even if the residents of these communities leave their homes, supposedly of their own volition, due to the unbearable living conditions that Israel’s policy is forcing upon them.

On 9 November 2017, military forces blocked off the roads leading from the communities of Khirbet Jenbah, Khirbet al-Fakhit and Khirbet al-Halawah to the main road in the area, Route 317, with dirt piles and rocks. To leave the area, residents had to drive to a roadblock, leave their car, walk several hundred meters to the main road and then take a taxi to their destination.

A few days later, residents partially opened the roadblocks, allowing cars through again. However, on 15 November, the military blocked the roads again, as well as the road leading out of Khirbet al-Markez. On 19 and 20 November, the military again blocked the roads to Khirbet al-Halawah and Khirbet al-Fakhit, which the residents had opened. The residents partially removed some of the roadblocks, but on 26 December the military placed rocks and dug deep, wide ditches across three main roads that lead to Route 317 – Khasham al-Buttom, Bir al-‘Eid and the way to a-Tuwani. This almost entirely sealed off the communities of Masafer Yatta, leaving residents almost no access in and out of the area. Five days later, residents managed to reopen the way to Khasham al-Buttom for cars and tractors. On 30 January 2018, they also reopened the way to Beir al-‘Eid to traffic, but as the road is in poor condition, it cannot be used to transport water, animal feed or groceries in wagons to these isolated communities.

For three months now, the residents of Masafer Yatta have been suffering harsh travel restrictions that force them to walk long distances, sometimes in harsh weather, or to drive along rough routes that damage their cars and cannot be used to transport bulk goods. These restrictions are the latest in a long line of abusive practices employed by the Israeli authorities as part of an attempt to remove the residents from area.

The following testimonies were given to B’Tselem field researchers Musa Abu Hashhash and Manal al-Ja’bri on 27 December 2017.

Hamzah Abu ‘Aram (29), a married father of one and farmer from the community of Khirbet al-Maghaz in Masafer Yatta, related:

My father and I own more than 150 heads of sheep. When it doesn’t rain, I have to drive all the way to Yatta almost daily to buy water and feed for the animals, as well as groceries for us. I drive a tractor that’s connected to a water tank behind, which I fill up there. Before they blocked off the roads in November, traveling from al-Maghaz to Yatta would take me about an hour in each direction. I drove along dirt roads used by farmers, through Bir al-‘Eid, Shu’b al-Buttom or a-Tuwani. I usually preferred the latter because it was the shortest route – only 12 kilometers.

In November, the Israeli military blocked off the three roads leading out of Masafer Yatta with dirt piles, but the residents partially removed them and we managed to get through somehow. Yesterday, the military forces came back and dug ditches across all three roads. When I saw them, I was shocked. They’re about three meters wide and more than two meters deep. I realized that none of us will be able to use these roads any more, by car or by tractor.

Yesterday I didn’t even try to go in to Yatta, because of the ditches. But today I had to go, because I had to get animal feed and pay back the merchant who sells it. I rode a donkey to a-Tuwani. I left home at 8:30 A.M. and got to Yatta at 11:00 A.M. I’m very worried and have no idea how I’ll be able to keep up a regular supply of water and feed for the animals and groceries for us. The donkey won’t be able to carry all that. If someone from my family gets sick, how can we take him to the clinic at Yatta?

They closed off the roads to make our lives difficult and pressure us into leaving the area, but that’s out of the question. I very much hope that our suffering will come to an end.

Majedah Raba’i (36), a married mother of four and the secretary of the Yatta local council, lives in the community of Khirbet Jenbah in Masafer Yatta. In her testimony, she stated:

I’m married to Jibrin Raba’i and we have four children. The eldest is 15 and the youngest is nine months old. I work every day. Until yesterday, every morning a council vehicle would come by and pick up the employees. We’d drive along the Bir al-‘Eid road and sometimes through Shu’b al-Buttom. It took about half an hour to get to work.

At the end of November and throughout December, the Israeli military blocked off several roads that lead to Masafer Yatta with dirt piles, but the farmers and residents partially reopened them, so we could still drive along the roads.

Yesterday morning I went to work as usual. Later, I learned that the military had closed off all three roads to Masafer Yatta – Bir al-‘Eid, Shu’b al-Buttom and a-Tuwani. I got very nervous. I couldn’t get home and had to sleep over at some relatives of mine in Yatta. Today I have to get home, because I have young children. After I finish work, the council vehicle will take me as far as the ditch along the Bir al-‘Eid way, and from there I’ll have to continue at least two kilometers on foot. The weather isn’t good and it will be hard. We won’t be able to keep this up for long, especially with the rain and mud on the dirt paths. My husband told me that no vehicles can drive along those roads right now. If this carries on, I won’t be able to come in to work.

I won’t be the only one to suffer from these roadblocks. My children and relatives will suffer, too. We won’t be able to take the kids to the doctor in Yatta, and my father-in-law is going to have a huge problem buying water and feed for the livestock. This is basically an extreme kind of siege that is affecting the lives of everyone in Masafer Yatta. The goal is to pressure us into leaving the area. It’s a violation of our most basic rights.

Nabil Abu ‘Aram (33), a married father of two and a teacher in Jenbah , lives in Yatta. He related:

I’m a maths teacher and have been working for five years at the co-ed elementary school at Jenbah , in Masafer Yatta. I drive to school in my car and give several other teachers a ride. We take the road through Bir al-‘Eid because it’s the shortest route. Sometimes we take the other roads, to Shu’b al-Buttom or a-Tuwani, because some teachers go to school in al-Fakhit . All these roads are unpaved dirt paths used by farmers. In November, the Israeli military placed dirt piles across all three roads and blocked them off to vehicles. The farmers and residents partially reopened them later, so we could still drive along them.

Yesterday, military bulldozers dug deep ditches across all three roads, and now no kind of vehicle can get across. This morning, my colleagues and I drove in my car up to the ditch dug across the Bir al-‘Eid road. I parked the car there and we walked to school, a distance of about two kilometers. It took us about half an hour. At the end of the school day, we took the same route back. It took longer, about 45 minutes, because we had to walk uphill and the path is rough. Until now, driving to school from Yatta used to take me 20 minutes.

The roadblocks are making our lives very difficult, especially now that it’s cold and rainy. If this continues, I don’t see how I’ll be able to carry on teaching at the school. 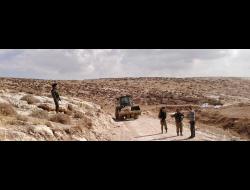