B’Tselem’s research indicates that on 29 and 30 April 2015 representatives of the Civil Administration (CA) served temporary evacuation orders to some sixty families, numbering some 410 people including approximately 120 minors, in seven Palestinian communities in the northern Jordan Valley. The orders required some families to leave their homes and property for periods of three to twelve hours. Other families were required to evacuate their homes for several hours a day, for several days running. The evacuation was ordered for a military maneuver in the area.

The families were given only a few days to prepare for the evacuation. Some of the residents received written orders from the CA, while others were notified of the evacuation only through the Tubas District of the Palestinian Authority. The communities required to evacuate: Ibziq, Khirbet Humsah, Khirbet a-Ras al-Ahmar, Zra’ ‘Awad, al-Burj, ‘Ein al-Meyteh and Khirbet al-Malih. Residents were required to stay out of their homes for part of the day, sometimes allowed to return home only in the evening. The evacuation process began on 3 May 2015 and continued in some communities through 9 May. The community of Khirbet Humsah was particularly hard hit, as some seventy of its residents had to leave their homes for several hours a day for a full week. The 110 or so residents of Khirbet a-Ras al-Ahmar and Zra’ ‘Awad had to evacuate their homes one day for several hours. The 230 or so residents of Ibziq, al-Burj, ‘Ein al-Meyteh and Khirbet al-Malih had to do so for several hours on two days. Military training near the community of a-Ras al-Ahmar. Photo: 'Aref Daraghmeh, B'Tselem, 5 May 2015

It is extremely difficult for whole families, including children, to be evacuated on such short notice. With no properly arranged place to stay, they must find a way to ensure shelter, food and drink away from home in the intense, grueling heat of the Jordan Valley.

Heijar Abu Zahu, 59, of al-Ibziq, related the following to B’Tselem researcher ‘Aref Daraghmeh on 12 May 2015:

We went through a few rough hours when we were evacuated from our home. We could take almost nothing with us, neither tents nor anything else. The place they told us to go to was far away and we had no shelter, no tent or anything, only the shade of the tractors and a few carts. We had almost no water and food. We took only a few things with us and they ran out. There was nothing nearby. It was awkward, because I and the other women and girls couldn’t go to the toilet, because there was nothing we could use to screen or conceal us. I have high blood pressure and respiratory problems. I took my medication in the morning, but I forgot it at home and couldn’t go back for it. Fire in a pasture during military training near al-Malih. Photo: 'Aref Daraghmeh, B'Tselem, 4 May 2015

The evacuated communities live solely off farming and shepherding. Evacuating them and holding military maneuvers on their land and in the vicinity is highly detrimental to their livelihood. During the evacuations, the residents had to leave their livestock behind, and the animals remained untended in the extreme heat. B’Tselem’s research has found that over the course of the military maneuver, ten sheep and goats died in the evacuated communities. In addition, ammunition remnants from the military training caused fires. Reports from the local councils of the Jordan Valley communities stated that dozens of hectares of pasture and cultivated agricultural land went up in flames. The maneuvers also included troops crossing farmland, and cultivated plots in Ibziq and a-Ras al-Ahmar were trampled. We left everything behind and took only a few things with us and a little food and drink. We left our livestock and belongings behind. I live in constant fear because of what’s going on in our area. We’ve already been evacuated several times before, and when we got back we found the lambs and kids hungry and thirsty. Some had died. They also burn everything when they do their training.

At the beginning of the season, we had good news in the form of rain and a lot of vegetation on the hills. Now, even though we put our trust in God, the training burned everything and destroyed our hopes. All around us everything is charred. All the pastureland has burned up and what’s left is areas off limits to us by military order. Military vehicles in the Jordan Valley during training. Photo: 'Aref Daraghmeh, B'Tselem, 4 May 2015

The minutes of a meeting of the Subcommittee for Judea and Samaria of the Knesset’s Foreign Affairs and Defense Committee, held on 27 April 2014 and published by Israeli daily Ha’aretz, clearly show that one goal of the military maneuvers held in the area is to remove Palestinians from land there. Colonel Einav Shalev, an Operations Branch Officer at Central Command, said in the meeting: “I think that one of the good steps that could fall between the cracks is restoring firing zones in places where they are meant to be and still are not. [That is] one of the main reasons that we, as a military system, send a lot of the training maneuvers to the Jordan Valley… When the troops march, people moved aside, and I’m making no distinction between Jews and Palestinians here, I’m speaking generally… There are some places [where] we significantly cut down on the amount of training, and weeds cropped up.”

Under international humanitarian law, an occupying state is permitted to operate within the occupied territory for two reasons only: the benefit of the local population and immediate military concerns relating to the military’s actions in the occupied territory. As an occupying power in the West Bank, Israel is not allowed to use land there for general military purposes such as training for warfare and general maneuvers. It certainly is not allowed to use such a pretext to harm the livelihood of protected persons, nor take steps to expel them from their homes.

Israel must immediately stop the temporary evacuation of Palestinian communities in the West Bank for the purpose of military training, and must cease all other actions taken in an attempt to force Palestinians out of the area. Israel is duty-bound to enable local residents to live their lives, including allowing them to build their homes legally and use local water sources. 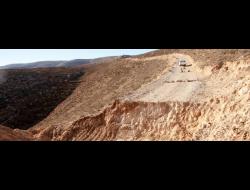 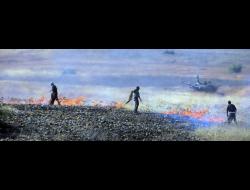 June in the Jordan Valley: In 7 days of maneuvers, military temporarily displaces hundreds and causes fires in farmland