After the High Court ruling, which greenlighted the state’s plan to demolish the community within a week, B’Tselem’s director wrote urgently to EU foreign policy chief Mogherini yesterday, warning that Israel is trampling the shared values that are at the core of its relationship with the EU.

B’Tselem director Hagai El-Ad wrote yesterday (8 September) to the High Representative of the European Union for Foreign Affairs and Security Policy, Federica Mogherini, calling upon the European Union to act urgently to prevent the destruction of the Khan al-Ahmar community, after Israel’s High Court gave the demolition plan the go-ahead earlier this week (5 September). According to the ruling, the state may demolish all the structures in the community, including a school attended by some 180 children, about half of them from other communities, as of the middle of next week.

In the letter, El-Ad quoted a statement from 18 July by Mogherini herself, in which she warned Israel that destroying the community would have serious consequences. According to El-Ad, “we have reached the juncture where it appears that these serious consequences must be spelled out, if the EU is to credibly back its own positions.”

Regarding the High Court ruling, El-Ad noted that “in their occupation-serving decision, the justices ignored both the context of a completely one-sided planning regime, where building ‘legally’ is an option reserved for settlers and denied from protected persons – as well as the broader Israeli intention, to minimize Palestinian presence throughout Area C, displace local communities, and expand settlements.”

“The EU obviously has ample leverage to affect a concrete impact, by showing Israel that unacceptable human rights violations will have serious consequences and spelling out exactly what it stands to lose”, wrote El-Ad. “Every day that goes by without any of the numerous tangibles Israel stands to lose being made conditional upon it ending human rights abuses against millions of Palestinians – and ending the occupation – articulates to the Israeli leadership, and to the Israeli public, that the EU accepts the current reality, and that, in fact, it is helping to sustain and advance it.”

“The destruction of an entire Palestinian community is the clearest recent expression of Israel’s unabashed disregard for the supposed shared values that presumably lie at the core of its relationship with the EU”, noted El-Ad, and ended by saying: “We are potentially less than a week away from the destruction of an entire Palestinian village. What may follow will dictate the fate of Palestinian communities all over the West Bank. If not act now, when?”

The residents of Khan al-Ahmar belong to the Bedouin Jahalin tribe. In the 1950s they were driven out of the area of Tel Arad in the Negev (within Israel) and made their new home in the West Bank, at a site where the settlement of Kfar Adumim was later established. They were driven out again and took up residence at their current location, some two kilometers south of the settlement. The community consists of 32 families that make up a total of 173 residents, 92 of them minors. In addition to homes, the community has a mosque and a school that serves some 180 children, about half of them from neighboring Palestinian communities.

For years, Israel has been endeavoring to displace this community for a variety of reasons, including the expansion of nearby settlements, de facto annexation of the area – without its Palestinian residents – and bisecting the West Bank. Expelling the community – or forcing its residents to leave by creating unbearable living conditions – will violate the prohibition on forcible transfer in international humanitarian law. The violation will constitute a war crime. Personal liability for the commission of this crime will be not only that of policy-makers – including the prime minister, senior minister, the chief of staff and the head of the Civil Administration – but also of those who paved the juridical route enabling it. 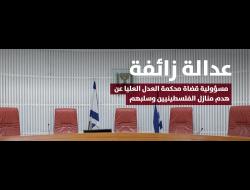 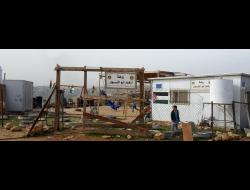 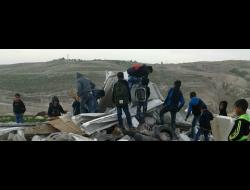