In early November 2021, according to figures the Israel Prison Service provided HaMoked: Center for the Defence of the Individual, Israel was holding 482 Palestinians in administrative detention. According to the Palestinian Authority Prisoners' Office, four of them are minors. Administrative detention is incarceration without trial alleging that a person intends to commit offense – without having done so yet. As the detainees are not given the grounds for their detention, which are based on classified evidence, they cannot mount a defense or refute the allegations made against them. Furthermore, unlike a regular prison sentence, administrative detention may be extended repeatedly, so the detainees cannot know when they will be released.

Israel uses this measure as a matter of routine. Over the years, it has held thousands of Palestinians in administrative detention for extended periods, some lasting years. Formally, judges review the administrative detention orders and the detainees may appeal to the Supreme Court. Yet this is merely a semblance of judicial overview and, barring highly exceptional cases, judges approve the vast majority of orders.

Administrative detention deeply affects the families of the detainees, especially in the case of minors. The families do not know when their loved ones will be released, and are forced to live in uncertainty for months on end. As Israel does not permit them regular contact, they have no way of knowing the physical and mental state of their incarcerated relatives. Phone calls are prohibited and visits are limited to a brief meeting behind a glass partition, with long intervals in between.

B'Tselem field researchers collected testimonies from the parents of three Palestinian minors currently being held in administrative detention. They described living in constant anxiety over their sons' wellbeing, with the uncertainty of never knowing when they will be released.

In a testimony he gave B'Tselem field researcher Iyad Hadad, Mu'amar Nakhleh (49) from Ramallah described how his family is coping with the incarceration of his 17-year-old son Amal:

Amal was born when his mother was six months pregnant. The doctors hooked him up to a ventilator and we feared he wouldn't survive. When we were asked for a name, we named him Amal (hope) because we hoped he would live. He was discharged from hospital about three months later.

In June 2020, Amal started vomiting blood. He had difficulty breathing and swallowing. Medical tests found a tumor in his lungs, which required surgery that could only be performed at the French Hospital in Jerusalem. We applied for permits to enter Israel for me and for him, so I could accompany him to the surgery, but my request was denied on security grounds. The ISA summoned Amal for questioning at Ofer Prison. On 1 June 2020, he met with them. They checked his ID card and after making him wait for two hours, they told him to go home because the interrogator wasn't there.

A few days later, we managed to sneak Amal into the hospital in Jerusalem with the help of some friends, and he had the surgery. He was discharged after five days. A few days later, someone from the ISA called us and summoned Amal for questioning again. I contacted the human rights organization Addameer, and they contacted the Israeli authorities and sent them his medical reports to prove he was ill. The Israelis informed Addameer he would not be arrested at that time. In October 2020, Amal was diagnosed with myasthenia gravis, a very rare disease that causes difficulty breathing and swallowing food, as well as cramps. He has to take medication every four hours.

On 2 November 2020, Amal was on his way to Rawabi with friends when soldiers arrested him. He was held for 38 days and released on 10 December. On Monday, 18 January 2021, he was summoned to the Palestinian Intelligence offices. They held him there overnight, and he came home the following day. He only managed to sleep at home for one night. Then, on the night between Wednesday and Thursday, soldiers and ISA agents came to our house at 3:00 A.M. They searched the house, told Amal to get dressed and get his medication, and arrested him. I immediately contacted Addameer to could find out where they had taken him. They checked me and informed me that the ISA had transferred Amal to administrative detention at Megiddo Prison.

Since then, his detention has been extended three times. His lawyer told us it might be extended a fourth time, and we're very anxious and tense. We don't have a moment’s peace. We worry about him all the time. His condition is currently stable and hasn’t grown worse, but he's at risk because of the length of the detention and his illness.

On 19 September 2021, when they extended Amal's detention for the third time, it was harder and more painful than the previous extensions because that time, he wasn't given a week’s notice and we believed he was about to be released. It felt like everything was happening in slow motion. I had calculated the dates and imagined: Now Amal's getting out of prison, he’s about to arrive and knock on the door, now is the moment we meet, a dream come true. But all that was taken away from us at the last minute, when our lawyer told us that minutes before he was supposed to be released, his detention had been extended for four months.

Since Amal was arrested, we've applied for a permit to visit him several times, but they only allowed his mother and me to visit him once, in April 2021. We saw him behind a glass partition and couldn't even hug him. The visit only lasted 40 minutes, which was barely enough time to ask him how he was doing and how his health was. He was tired and weak and said he was taking his medication regularly. I felt that he was just saying that so we wouldn't worry. Since the visit, we've applied every month, but all the requests have been rejected. They say I’m denied entry because I've been in prison, and that's why my wife is also denied. We submit requests every month. One time, the Red Cross informed us that we’d received permission to visit, but five days later they got back to us and said the ISA had gone back on their word and the permit had been revoked. That was really tough. Five days ago, we were informed we’ve received a permit to visit him on 8 November 2021. Amal's mother and I are now very anxious that our permit will be revoked again.

Update: On 8 November 2021, Amal Nakhleh's father and brother visited him in prison.

In a testimony she gave B'Tselem field researcher Musa Abu Hashhash, Safaa al-Harimi (43), a mother of five from Wadi Rahal in Bethlehem District, recounted the arrest of her 17-year-old son Sami:

My son Sami ran our family's small grocery store. On 20 September 2021, while he was asleep in bed, soldiers entered our home. Sami yelled that he hadn't done anything and that he didn't want to go to prison. At first, they took him for questioning at the Russian Compound in Jerusalem. After 10 days, he was issued an administrative detention order for four months. Our lawyer said the arrest was probably related to incitement on Facebook, but he didn't know any more than that. At first, we didn't even know which prison Sami was in, until we contacted HaMoked and found out he was in Ofer Prison.

I don't know why the military arrested my son. He worked in the grocery store from morning till night. It's very hard without him. I think about him all the time: when we sit down to eat, when I go into his room and see his empty bed. I keep calling the lawyer to check if there's any new information and if he's visited him. I'm trying to find out if he's coming home at the end of the four months’ detention, but no one knows. I worry about Sami very much. He's still a child and doesn't know how to deal with something like this. I saw how scared he was when he was arrested.

In a testimony she gave B'Tselem field researcher Abdulkarim Sadi, Asmaa Mansur (37), a mother of four from Jenin, spoke about the administrative detention of her 17-year-old son Muhammad:

In the early hours of 8 April 2021, soldiers entered our home. It was the first time in my life that happened to me. The soldiers broke the door down while we were asleep, and we woke up from their shouting. We ran to the door to stop them from entering the kids’ rooms. Three of our kids live with us – Muhammad (17), Masah (16) and Maryam (11). Meanwhile, the kids woke up from the shouting and came out of their rooms.

The soldiers went for Muhammad immediately. I saw one of them hit him on the head with a rifle butt. Another one tied Muhammad’s hands together, and then they put him in one of the rooms. After about five minutes, they led him out of the house without letting us give him clothes, say goodbye or hug him. They took away his cell phone. I asked them to let me say goodbye to him, but they yelled at me and wouldn't let me come near. When they led Muhammad out, I was shocked to see dozens of soldiers surrounding the house in every direction. There was also a masked man in plain clothes with them.

After they arrested Muhammad, he was taken for questioning at Jalameh Prison (Kishon) and held there for 28 days. Then he was transferred to administrative detention at Megiddo Prison. The first administrative detention order was issued for four months, until 10 August 2021. We expected him to be released, but the day before the order expired, the prison told us not to pick him up because his detention had been extended by another six months, until 8 February 2022. We couldn't believe it was happening.

I still have an anxiety attack whenever I think about the day he was arrested. I'm very sad about Muhammad. He was an outstanding student. The day before he was arrested, he had a test in which he got an A. Being in prison has denied him the opportunity to continue studying in high school, and deprived me of the joy of seeing him graduate successfully. I worry he’ll be in prison for a long time and it will ruin his future. Muhammad hoped to study abroad after graduating from high school.

Since Muhammad was arrested, we’ve only been allowed to visit him once. That was six months and five days after the arrest. It's hard to describe how shocking it is to see your son behind a glass partition. His father and I spoke with him on the phone for 45 minutes, through the glass. We both cried non-stop. Since then, only his lawyer has been able to visit him. 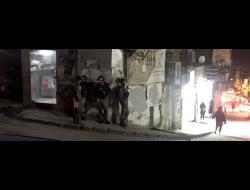 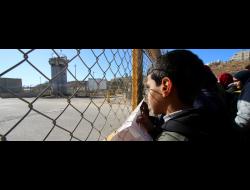